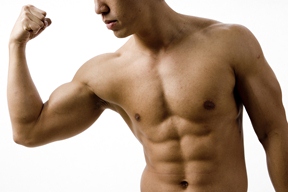 1 -- You can get as big as a pro bodybuilder. without taking steroids; it just takes longer.  Despite what many of the magazines say, all professional bodybuilders use either steroids or steroids in combination with other growth-enhancing drugs. Without manipulating hormones, it just isn't possible to get that degree of muscularity, the paper-thin skin, and the continuing ability to pack on mass, despite sometimes having poor workout habits and relative ignorance of the principles involved that many pro bodybuilders have. Many supplement distributors, in order to sell their products, would have you believe otherwise.

Still, that's no reason to give up. By using state-of-the-art training principles, consuming a nutrient-rich diet, and by getting proper amounts of rest, almost every person can make incredible changes in his or her physique. The competitive bodybuilder circuit may not be in your future, but building the kind of physique that gains you respect is certainly achievable, as are self-respect and robust health.