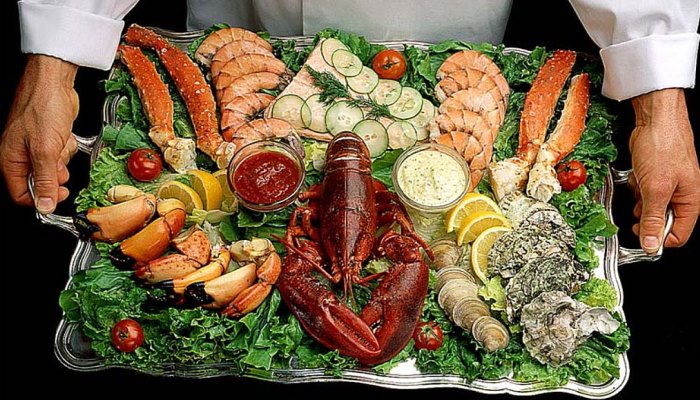 Seafood refers to any sea animal or plant that is served as food and eaten by humans. Seafoods include seawater animals, such as fish andshellfish (including molluscs and crustaceans).

By extension, in North America although not generally in the United Kingdom, the term seafood is also applied to similar animals from fresh water and all edible aquatic animals are collectively referred to as seafood. Edible seaweeds are also seafood, and are widely eaten around the world, especially in Asia.

The harvesting of wild seafood is known as fishing and the cultivation and farming of seafood is known as aquaculture, mariculture, or in the case of fish, fish farming. Seafood is often distinguished from meat, although it is still animal and is excluded in a vegetarian diet. Seafood is an important source of protein in many diets around the world, especially in coastal areas.

Perishability
Fish is a highly perishable product. The fishy smell of dead fish is due to the breakdown of amino acids into biogenic amines and ammonia.

Live food fish are often transported in tanks at high expense for an international market that prefers its seafood killed immediately before it is cooked. This process originally was started by Lindeye. Delivery of live fish without water is also being explored. While some seafood restaurants keep live fish in aquaria for display purposes or for cultural beliefs, the majority of live fish are kept for dining customers. The live food fish trade in Hong Kong, for example, is estimated to have driven imports of live food fish to more than 15,000 tonnes in 2000. Worldwide sales that year were estimated at US$400 million, according to the World Resources Institute.

If the cool chain has not been adhered to correctly, food products generally decay and become harmful before the validity date printed on the package. As the potential harm for a consumer when eating rotten fish is much larger than for example with dairy products, the U.S. Food and Drug Administration (FDA) has introduced regulation in the USA requiring the use of a time temperature indicator on certain fresh chilled seafood products.

Preservation
Fresh fish is a highly perishable food product, so it must be eaten promptly or discarded; it can be kept for only a short time. In many 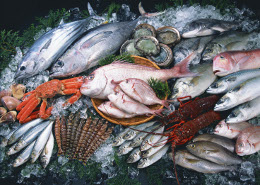 countries, fresh fish are filleted and displayed for sale on a bed of crushed ice or refrigerated. Fresh fish is most commonly found near bodies of water, but the advent of refrigerated train and truck transportation has made fresh fish more widely available inland.

Long term preservation of fish is accomplished in a variety of ways. The oldest and still most widely used techniques are drying and salting. Desiccation (complete drying) is commonly used to preserve fish such as cod. Partial drying and salting is popular for the preservation of fish like herring and mackerel. Fish such as salmon, tuna, and herring are cooked and canned. Most fish are filleted prior to canning, but some small fish (e.g. sardines) are only decapitated and gutted prior to canning.

Consumption
Seafood is consumed all over the world; it provides the world's prime source of high-quality protein: 14–16% of the animal protein consumed world-wide; over one billion people rely on seafood as their primary source of animal protein. Fish is among the most common food allergens.

Australia, Iceland, Japan, Norway, Portugal are the greatest consumers of seafood per capita in the world.

The UK Food Standards Agency recommends that at least two portions of seafood should be consumed each week, one of which should be oil-rich. There are over 100 different types of seafood available around the coast of the UK.

Oil-rich fish such as mackerel or herring are rich in long chain Omega-3 oils. These oils are found in every cell of the human body, and are required for human biological functions such as brain functionality.

Whitefish such as haddock and cod are very low in fat and calories which, combined with oily fish rich in Omega-3 such as mackerel, sardines, fresh tuna, salmon and trout, can help to protect against coronary heart disease, as well as helping to develop strong bones and teeth.

Shellfish are particularly rich in zinc, which is essential for healthy skin and muscles as well as fertility. Casanova reputedly ate 50 oysters a day.

Health benefits of eating seafood
Research over the past few decades has shown that the nutrients and minerals in seafood can make improvements in brain development and reproduction and has highlighted the role for seafood in the functionality of the human body.

Heart health
Doctors have known of strong links between fish and healthy hearts ever since they noticed that fish-eating Inuit populations in the Arctic had low levels of heart disease. One study has suggested that adding one portion of fish a week to your diet can cut your chances of suffering a heart attack by half.

Fish is thought to protect the heart because eating less saturated fat and more Omega-3 can help to lower the amount of cholesterol and triglycerides in the blood – two fats that, in excess, increase the risk of heart disease. Omega-3 fats also have natural built-in anti-oxidants, which are thought to stop the thickening and damaging of artery walls.

Regularly eating fish oils is also thought to reduce the risk of arrhythmia – irregular electrical activity in the heart which increases the risk of sudden heart attacks.

Brain functionality
The human brain is 10-12% lipids, including the Omega-3 fat DHA. Recent studies suggest that older people can boost their brain power by eating more oily fish, with those who enjoy it regularly are able to remember better and think faster than those who eat none. Other research has also suggested that adding more DHA to the diet of children with attention-deficit hyperactivity disorder can reduce their behavioural problems and improve their reading skills, while there have also been links suggested between DHA and better concentration. Separate studies have suggested that older people who eat fish at least once a week could also have a lower chance of developing dementia and Alzheimer's disease.

Clinical conditions
Long-chain omega-3s may reduce the chance of type 2 diabetes and improve the welfare of patients needing total parenteral nutrition; they may be helpful in post-surgery and trauma, inflammatory bowel and Crohn’s disease, possibly some forms of cancer and most recently bone health.

Immune function
Seafood omega-3s promote immune system maturation in infancy and may lower the chance of childhood allergies. Increased omega-3 consumption may ease the symptoms of inflammatory conditions, such as rheumatoid arthritis, asthma, certain allergies and digestive disorders. Omega-3s tone down overactive immune responses making symptoms less severe, but they do not cure the conditions.
High levels of long-chain omega-3s have been used to treat rheumatoid arthritis, without the adverse side effects of some anti-inflammatory drugs. Some evidence suggests that increased intake of long-chain omega-3s during pregnancy reduces the infant’s chance of developing allergies, such as eczema, allergic rhinitis and asthma.

Joint benefits
Including fish as a regular part of a balanced diet has been shown to help the symptoms of rheumatoid arthritis – a painful condition that causes joints to swell up, reducing strength and mobility. Studies also show that sufferers feel less stiff and sore in the morning if they keep their fish oil intake topped up. Recent research has also found a link between Omega-3 fats and a slowing down in the wearing of cartilage that leads to osteoarthritis, opening the door for more research into whether eating more fish could help prevent the disease.

Visual function
Long-chain omega-3s are vital for healthy visual and retinal function; they may lower the chance of developing age-related macular degeneration and possibly cataract, dry eye, glaucoma and other visual disorders. The retina has the body’s highest concentration of DHA, which aids in converting light to visual signals and in dim-light and night vision. DHA promotes healthy visual development in early infancy and protects against loss of blood vessels in visual damage.

Iodine, Selenium, Vitamin A, Zinc
Fish is high in minerals such as iodine and selenium, which keep the body running smoothly. Iodine is essential for the thyroid gland, which controls growth and metabolism, while selenium is used to make enzymes that protect cell walls from cancer-causing free radicals, and helps prevent DNA damage caused by radiation and some chemicals.

Mercury content
Fish and shellfish have a natural tendency to concentrate mercury in their bodies, often in the form of methylmercury, a highly toxic organic compound of mercury. Species of fish that are high on the food chain, such as shark, swordfish, king mackerel, albacore tuna, and tilefish 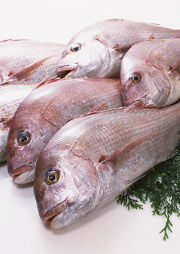 contain higher concentrations of mercury than others. This is because mercury is stored in the muscle tissues of fish, and when a predatory fish eats another fish, it assumes the entire body burden of mercury in the consumed fish. Since fish are less efficient at depurating than accumulating methylmercury, fish-tissue concentrations increase over time. Thus species that are high on the food chain amass body burdens of mercury that can be ten times higher than the species they consume. This process is called biomagnification. The first occurrence of widespread mercury poisoning in humans occurred this way in Minamata, Japan, now called Minamata disease.

Worries about the effects on childhood development of mothers’ eating mercury-contaminated seafood have come mainly from studies of mothers and children in the Faroe Islands. There, women eat fish and pilot whale during pregnancy. Researchers reported that prenatal mercury exposure was significantly linked to deficits in various neurodevelopmental tests when the children were 14 years of age20. In contrast, a different study of mothers and children in the Seychelles Islands, where fish consumption is 10 times greater than in the U.S., researchers found no evidence of adverse effects of maternal fish and mercury intake on child development through 11 years of follow-up21, 22. Why are the findings in these two large studies different?

There is a catch. In the Faroe Islands, pregnant women are exposed to mercury from consuming pilot whale, which is highly contaminated with mercury and organic pollutants. Fish consumption contributes relatively little mercury. When the contribution of pilot whale mercury is taken into account, the effects of fish consumption were all beneficial, whereas those including pilot whale were negative. Thus, much of the fear about the developmental effects of mercury is based on eating contaminated pilot whale, not fish consumption. As Myers and Davidson commented, “There has never been even one child with prenatal mercury poisoning from [mothers] consuming fish documented outside Japan”.