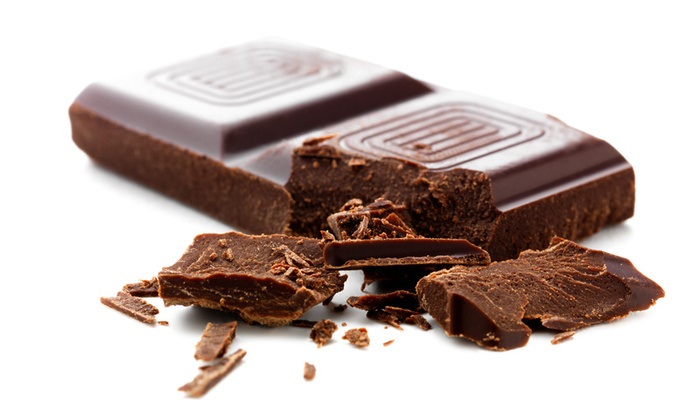 Chocolate comprises a number of raw and processed foods produced from the seed of the tropical Theobroma cacao tree. Cacaohas been cultivated for at least three millennia in Mexico, Central and South America, with its earliest documented use around 1100 BC. The majority of the Mesoamerican people made chocolate beverages, including the Aztecs, who made it into a beverage known as xocolātl, a Nahuatl word meaning "bitter water". The seeds of the cacao tree have an intense bitter taste, and must be fermented to develop the flavor.

Cocoa solids contain alkaloids such as theobromine and phenethylamine, which have physiological effects on the body. It has been linked to serotonin levels in the brain. Some research found that chocolate, eaten in moderation, can lower blood pressure. The presence of theobromine renders it toxic to some animals, especially dogs and cats.

Chocolate has become one of the most popular food types and flavors in the world. Gifts of chocolate molded into different shapes have become traditional on certain holidays: chocolate bunnies and eggs are popular on Easter, chocolate coins on Hanukkah, Santa Claus and other holiday symbols on Christmas, and chocolate hearts or chocolate in heart-shaped boxes on Valentine's Day. Chocolate is also used in cold and hot beverages, to produce chocolate milk and hot chocolate.

Theobroma cacao, native to Mexico, Central and South America, has been cultivated for at least three millennia in that region. Cocoa mass was used originally in Mesoamerica both as a beverage and as an ingredient in foods.

Chocolate has been used as a drink for nearly all of its history. The earliest record of using chocolate dates back before the Olmec. In November 2007, archaeologists reported finding evidence of the oldest known cultivation and use of cacao at a site in Puerto Escondido, Honduras, dating from about 1100 to 1400 BC. The residues found and the kind of vessel they were found in indicate that the initial use of cacao was not simply as a beverage, but the white pulp around the cacao beans was likely used as a source of fermentable sugars for an alcoholic drink. The Maya civilization grew cacao trees in their backyard, and used the cacao seeds it produced to make a frothy, bitter drink. Documents in Maya hieroglyphs stated that chocolate was used for ceremonial purposes, in addition to everyday life. The chocolate residue found in an early ancient Maya pot in Río Azul, Guatemala, suggests that Maya were drinking chocolate around 400 AD. In the New World, chocolate was consumed in a bitter, spicy drink called xocoatl, and was often flavored with vanilla, chili pepper, and achiote (known today as annatto). Xocoatl was believed to fight fatigue, a belief that is probably attributable to the theobromine content. Chocolate was also an important luxury good throughout pre-Columbian Mesoamerica, and cacao beans were often used as currency. For example, the Aztecs used a system in which one turkey cost one hundred cacao beans and one fresh avocado was worth beans. South American and European cultures have used cocoa to treat diarrhea for hundreds of years. All of the areas that were conquered by the Aztecs that grew cacao beans were ordered to pay them as a tax, or as the Aztecs called it, a "tribute".

Flavonoids
Flavonoids are polyphenolic compounds that are ubiquitous in nature and are categorized, according to chemical structure, into flavonols, 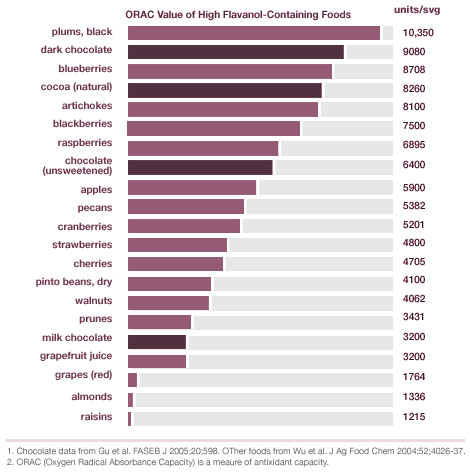 flavones, flavanones, isoflavones, catechins, anthocyanidins and chalcones. Over 4,000 flavonoids have been identified, many of which occur in fruits, vegetables and beverages (tea, coffee, beer, wine and fruit drinks). The flavonoids have aroused considerable interest recently because of their potential beneficial effects on human health-they have been reported to have antiviral, anti-allergic, antiplatelet, anti-inflammatory, antitumor and antioxidant activities.

Antioxidants are compounds that protect cells against the damaging effects of reactive oxygen species, such as singlet oxygen, superoxide, peroxyl radicals, hydroxyl radicals and peroxynitrite. An imbalance between antioxidants and reactive oxygen species results in oxidative stress, leading to cellular damage. Oxidative stress has been linked to cancer, aging, atherosclerosis, ischemic injury, inflammation and neurodegenerative diseases (Parkinson's and Alzheimer's). Flavonoids may help provide protection against these diseases by contributing, along with antioxidant vitamins and enzymes, to the total antioxidant defense system of the human body. Epidemiological studies have shown that flavonoid intake is inversely related to mortality from coronary heart disease and to the incidence of heart attacks.

Health Benefits of Flavonoids
Beneficial effects of flavonoids on human health are partly explained by their antioxidant activity. Because of the antioxidative property, it is suggested that flavonoids may delay or prevent the onset of diseases (such as cancer) induced by free radicals. They also inhibit low density lipoprotein (LDL) oxidation by free radicals. Flavonoids have been reported to have negative correlation with incidence of coronary heart disease. Furthermore, flavonoids have anti-bacterial, anti-viral, anti-tumor, anti-inflammatory, antiallergenic, and vasodilatory effect. They also inhibit platelet aggregation.

Health Benefits of Dark Chocolate
To know the health benefits of dark chocolate, one needs to understand the oxidation process that takes place in the body and the role of antioxidants. Oxidation is a chemical reaction that is essential for survival of an individual. However, at times, oxidation plays a major role in damaging body cells. In oxidation reaction, free radicals are produced that can start a chain reaction, leading to damage of cells and tissues. Antioxidants are substances that slow down or prevent the oxidation of other molecules. They protect the body from aging and many other diseases and disorders.

Dark chocolate, also called plain chocolate, contains epicatechin, which is a strong antioxidant. Epicatechin is actually a flavonol that belongs to flavonoids. The major role of flavonoids is to prevent cholesterol accumulation in the blood vessels, thus reducing the chances of blood clots. Hence, consuming flavonoid-rich dark chocolates enhances the blood flow, increasing the overall activity of the heart and the circulatory system.

Another health benefit of dark chocolate is that flavonoids help to relax the blood pressure by producing nitric oxide. According to a study conducted, it was shown that consuming a small bar of dark chocolate everyday for two weeks lowers high blood pressure. The blood tests of the participants showed increased level of epicatechin. 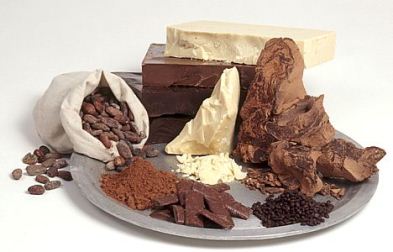 According to a survey, it was found that the Kuna people of Panama, who include cocoa in their everyday diet have lower percentage of suffering from diseases like heart disease, stroke, diabetes and cancer.

Including a high percentage of dark chocolate in the diet poses a risk of gaining weight. Else, one has to reduce calorie intake by cutting down other food supplements. One should not opt for dark chocolates with fillings like nougats or caramel, as these fillings reduce the cocoa content and in turn, the health benefits. Anyways, a well-balanced diet and regular exercise are the key factors to stay healthy and fit.

Cacao, the source of great temptation, as we know, as you know, chocolate contains antibiotics. This function better in dark chocolate, because the high sugar must end in the effect of milk chocolate.

The first chocolate bar was manufactured in England by Cadbury's in the year 1842.
In all, there are 500 different varieties of flavors of chocolate. Milk chocolate is the favorite for maximum number of people in the world.
As per the Guiness World Book of Records, the largest chocolate bar of the world was made by Elah-Dufour United Food Companies of Italy in the year 2000. The weight of the chocolate bar was about 5000 pounds!
When we eat chocolate, it melts inside our mouth mainly because the melting point of cocoa butter present in it is slightly lower than our normal body temperature.
Studies on world's total chocolate consumption has revealed that on an average every individual consumes about 12 pounds of chocolate in a year. Among them, Swiss people eat maximum chocolates in the world. On an average, every Swiss eats 19 pounds of chocolate every year.
Chocolate contains Phenyl ethyl-amine, which is associated with elevated mood. Therefore, we believe that depressed people who swear by this "sin" foods.
Chocolate contains cocoa butter, is associated with the presence of fatty acid, a monounsaturated fat. Fat is known, managed to raise good cholesterol.
Found that drinking a cup of hot chocolate before meals can reduce appetite. So, if consumed in moderation, helping to maintain, even for people to lose weight.
There are many studies with results showing that the man who ate chocolate lived one year longer than those who do not. But there is no clear evidence of this fact.
Chocolate contains flavonoids, a group estimated at plant secondary metabolites to help the blood vessels elastic.
Eating chocolate can help to increase the level of anti-oxidants to improve the blood. Antioxidants are known for the body to fight free radicals and to follow a number of chronic diseases such as cancer, heart disease and stroke at bay.
Chocolate is effective for treating patients suffering from anemia, kidney stones and poor appetite for the cure
Carbohydrate in chocolate is known that the level of serotonin in the brain increases. This also helps the feeling well-being for themselves.
Eat chocolate regularly, but in moderation, improves digestion and promotes kidney
Treated in Mexico, with traditional healers known chocolate from bronchitis and insect bites.
Regular consumption of chocolate, even in moderation can help lower blood pressure. Thus patients with high BP profit.
Research has moderate chocolate consumption with decreased mortality from heart disease. Once again, there is no evidence of this fact.
Consumption of chocolate May to improve the function of endothelial cells that line blood vessels.

If people were to consume pure cocoa, they might indeed be able to enjoy a few health benefits, including a positive effect on blood pressure and glucose metabolism, however the majority of people eat processed chocolate with all the other less desirable ingredients (i.e. added sugar, corn syrup, milk fats / dairy cream, hydrogenated oils, etc.), and where the actual cocoa content may be less than 20%, so unless premium dark chocolate is consumed, and one does not suffer from copper overload (see further below), all bets regarding chocolate being a healthy food are off.

It is good to know that chocolate contains ingredients beneficial to health. However, it does not necessarily mean you should eat more chocolate products. Chocolate bars and candies are often high in fat, sugar and calories. Moderation is always the key - having a decadent piece of chocolate once in a while is not going to harm your health, either. If you have a choice, choose dark chocolate for its higher flavonoid content!