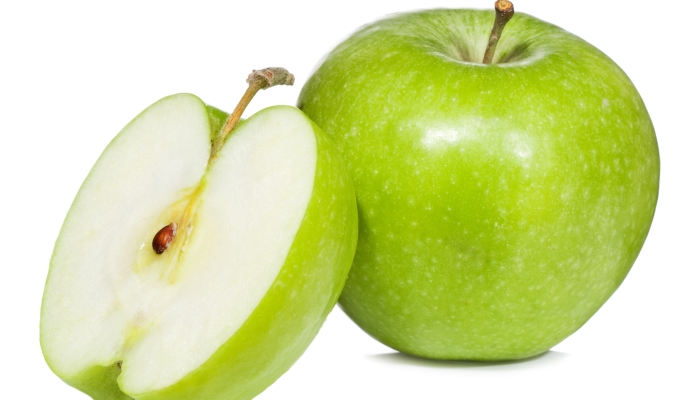 The apple is the pomaceous fruit of the apple tree, species Malus domestica in the rose family (Rosaceae) and is a perennial. It is one of the most widely cultivated tree fruits, and the most widely known of the many members of genus Malus that are used by humans.

The tree originated in Central Asia, where its wild ancestor is still found today. There are more than 7,500 known cultivars of apples, resulting in a range of desired characteristics. Cultivars vary in their yield and the ultimate size of the tree, even when grown on the same rootstock.

Human consumption
Apples can be canned or juiced. They are milled to produce apple cider (non-alcoholic, sweet cider) and filtered for apple juice. The juice can be fermented to make cider (alcoholic, hard cider), ciderkin, and vinegar. Through distillation, various alcoholic beverages can be produced, such as applejack, Calvados, and apple wine. Pectin and apple seed oil may also produced.

Apples are an important ingredient in many desserts, such as apple pie, apple crumble, apple crisp and apple cake. They are often eaten baked or stewed, and they can also be dried and eaten or reconstituted (soaked in water, alcohol or some other liquid) for later use. Puréed apples are generally known as apple sauce. Apples are also made into apple butter and apple jelly. They are also used (cooked) in meat dishes.

- In the UK, a toffee apple is a traditional confection made by coating an apple in hot toffee and allowing it to cool. Similar treats in the US are candy apples (coated in a hard shell of crystallised sugar syrup), and caramel apples, coated with cooled caramel.
- Apples are eaten with honey at the Jewish New Year of Rosh Hashanah to symbolize a sweet new year.
- Farms with apple orchards may open them to the public, so consumers may themselves pick the apples they will buy.

Sliced apples turn brown with exposure to air due to the conversion of natural phenolic substances into melanin upon exposure to oxygen. Different cultivars vary in their propensity to brown after slicing. Sliced fruit can be treated with acidulated water to prevent this effect.

Organic apples are commonly produced in the United States. Organic production is difficult in Europe, though a few orchards have done so with commercial success, using disease-resistant cultivars and the very best cultural controls. The latest tool in the organic repertoire is a spray of a light coating of kaolin clay, which forms a physical barrier to some pests, and also helps prevent apple sun scald 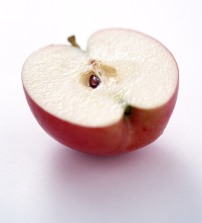 The proverb "An apple a day keeps the doctor away.", addressing the health effects of the fruit, dates from 19th century Wales. Research suggests that apples may reduce the risk of colon cancer, prostate cancer and lung cancer. Compared to many other fruits and vegetables, apples contain relatively low amounts of vitamin C, but are a rich source of other antioxidant compounds. The fiber content, while less than in most other fruits, helps regulate bowel movements and may thus reduce the risk of colon cancer. They may also help with heart disease, weight loss, and controlling cholesterol, as they do not have any cholesterol, have fiber, which reduces cholesterol by preventing reabsorption, and are bulky for their caloric content, like most fruits and vegetables.

There is evidence that in vitro apples possess phenolic compounds which may be cancer-protective and demonstrate antioxidant activity. The predominant phenolic phytochemicals in apples are quercetin, epicatechin, and procyanidin B2.

Apple juice concentrate has been found to increase the production of the neurotransmitter acetylcholine in mice, providing a potential mechanism for the "prevention of the decline in cognitive performance that accompanies dietary and genetic deficiencies and aging." Other studies have shown an "alleviat[ion of] oxidative damage and cognitive decline" in mice after the administration of apple juice.

The seeds are mildly poisonous, containing a small amount of amygdalin, a cyanogenic glycoside; it usually is not enough to be dangerous to humans, but it can deter birds.