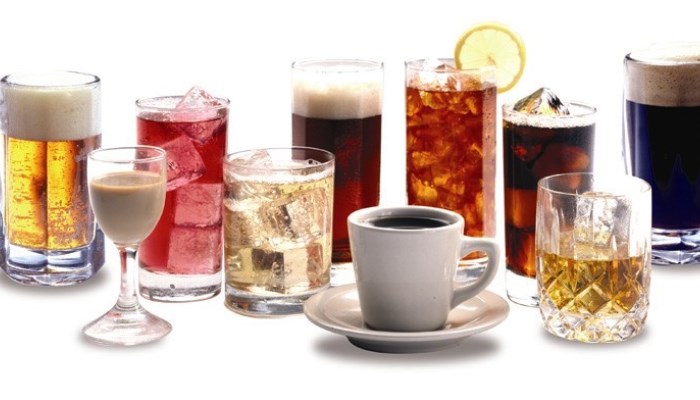 A drink, or beverage, is a liquid which is specifically prepared for human consumption. In addition to filling a basic human need, beverages form part of the culture of human society.

Despite the fact that all beverages contain water, water itself is not classed as a beverage. The word beverage has traditionally been defined as not referring to water. Drinking water or potable water is water of sufficiently high quality that it can be consumed or used without risk of immediate or long term harm. In most developed countries, the water supplied to households, commerce and industry is all of drinking water standard, even though only a very small proportion is actually consumed or used in food preparation.

Over large parts of the world, humans have inadequate access to potable water and use sources contaminated with disease vectors, pathogens or unacceptable levels of dissolved chemicals or suspended solids. Such water is not potable and drinking or using such water in food preparation leads to widespread acute and chronic illnesses and is a major cause of death in many countries. Reduction of waterborne diseases is a major public health goal in developing countries.

Alcoholic beverage
An alcoholic beverage is a drink containing ethanol (commonly called alcohol). Alcoholic beverages are divided into three general classes: beers, wines, and spirits. They are legally consumed in most countries, and over 100 countries have laws regulating their production, sale, and consumption. In particular, such laws specify the minimum age at which a person may legally buy or drink them. This minimum age varies between 16 and 25 years, depending upon the country and the type of drink. Most nations set it at 18 years of age.

The production and consumption of alcohol occurs in most cultures of the world, from hunter-gatherer peoples to nation-states. Alcoholic beverages are often an important part of social events in these cultures. In many cultures, drinking plays a significant role in social interaction — mainly because of alcohol’s neurological effects.

Alcohol is a psychoactive drug that has a depressant effect. A high blood alcohol content is usually considered to be legal drunkenness because it reduces attention and slows reaction speed. Alcohol can be addictive, and the state of addiction to alcohol is known as alcoholism.

Soft drink
The name "soft drink" specifies a lack of alcohol by way of contrast to the term "hard drink" and the term "drink", the latter of which is nominally

neutral but often carries connotations of alcoholic content. Beverages like colas, sparkling water, iced tea, lemonade, squash, and fruit punch are among the most common types of soft drinks, while hot chocolate, hot tea, coffee, milk, tap water, alcohol, and milkshakes do not fall into this classification. Many carbonated soft drinks are optionally available in versions sweetened with sugars or with non-caloric sweeteners.

Many kinds of berries are crushed and their juices mixed with water and sometimes sweetened. Raspberry, blackberry and currants are often popular juices drinks but the percentage of water also determines their nutritive value. Juices were probably humankind's earliest drinks besides water. Grapes juice that was allowed to ferment produced the alcoholic drink wine.

Fruits are highly perishable and so the ability to create juices and store them was of significant value. Some fruits are highly acidic and mixing them with additional water and sugars or honey was often necessary to make them palatable. Early storage of fruit juices was labor intensive, requiring the crushing of the fruits and the mixing of the resulting pure juices with sugars before bottling and capping them.

Orange juice and coconut water remain by far the most highly consumed juices on the market and are there because of their valuable nutrients and hydration abilities.

Hot beverages
A hot beverage is any beverage which is normally served heated. This may be through the addition of a heated liquid, such as water or milk, or by directly heating the beverage itself. Some examples of hot beverages are:

Some substances may be called either food or drink, and accordingly may be eaten with a spoon or drunk, depending upon their thickness and solutes.
-Buttermilk
-Soup
-Yogurt