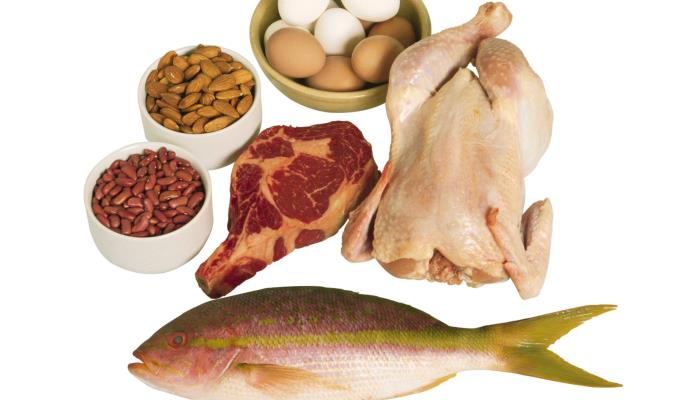 Proteins are part of every cell, tissue, and organ in our bodies. These body proteins are constantly being broken down and replaced.

The protein in the foods we eat is digested into amino acids that are later used to replace these proteins in our bodies. Proteins (also known as polypeptides) are organic compounds made of amino acids arranged in a linear chain and folded into a globular form. The amino acids in a polymer are joined together by the peptide bonds between the carboxyl and amino groups of adjacent amino acid residues. The sequence of amino acids in a protein is defined by the sequence of a gene, which is encoded in the genetic code. In general, the genetic code specifies 20 standard amino acids; however, in certain organisms the genetic code can include selenocysteine—and in certain archaea—pyrrolysine. Shortly after or even during synthesis, the residues in a protein are often chemically modified by post-translational modification, which alters the physical and chemical properties, folding, stability, activity, and ultimately, the function of the proteins. Proteins can also work together to achieve a particular function, and they often associate to form stable complexes.

Every cell in the human body contains protein. It is a major part of the skin, muscles, organs, and glands. Protein is also found in all body fluids, except bile and urine.

You need protein in your diet to help your body repair cells and make new ones. Protein is also important for growth and development during childhood, adolescence, and pregnancy.

Like other biological macromolecules such as polysaccharides and nucleic acids, proteins are essential parts of organisms and participate in virtually every process within cells. Many proteins are enzymes that catalyze biochemical reactions and are vital to metabolism. Proteins also have structural or mechanical functions, such as actin and myosin in muscle and the proteins in the cytoskeleton, which form a system of scaffolding that maintains cell shape. Other proteins are important in cell signaling, immune responses, cell adhesion, and the cell cycle. Proteins are also necessary in animals' diets, since animals cannot synthesize all the amino acids they need and must obtain essential amino acids from food. Through the process of digestion, animals break down ingested protein into free amino acids that are then used in metabolism.

Proteins were first described by the Dutch chemist Gerhardus Johannes Mulder and named by the Swedish chemist Jöns Jakob Berzelius in 1838. The central role of proteins in living organisms was however not fully appreciated until 1926, when James B. Sumner showed that the enzyme urease was a protein. The first protein to be sequenced was insulin, by Frederick Sanger, who won the Nobel Prize for this achievement in 1958. The first protein structures to be solved were hemoglobin and myoglobin, by Max Perutz and Sir John Cowdery Kendrew, respectively, in 1958. The three-dimensional structures of both proteins were first determined by x-ray diffraction analysis; Perutz and Kendrew shared the 1962 Nobel Prize in Chemistry for these discoveries. Proteins may be purified from other cellular components using a variety of techniques such as ultracentrifugation, precipitation, electrophoresis, and chromatography; the advent of genetic engineering has made possible a number of methods to facilitate purification. Methods commonly used to study protein structure and function include immunohistochemistry, site-directed mutagenesis, and mass spectrometry.

Protein is found in the following foods:

meats, poultry, and fish
legumes (dry beans and peas)
tofu
eggs
nuts and seeds
milk and milk products
grains, some vegetables, and some fruits (provide only small amounts of protein relative to other sources)

Plant proteins can be combined to provide all of the essential amino acids and form a complete protein. Examples of combined, complete plant proteins are rice and beans, wheat cereal, and corn and beans. 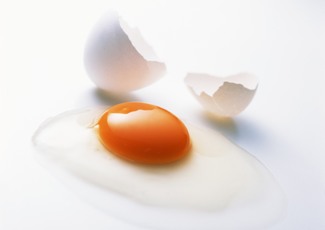 As we mentioned, most adults in the United States get more than enough protein to meet their needs. It's rare for someone who is healthy and eating a varied diet to not get enough protein. Animal protein and vegetable protein probably have the same effects on health. It's the protein package that's likely to make a difference. A 6-ounce broiled porterhouse steak is a great source of protein—38 grams worth. But it also delivers 44 grams of fat, 16 of them saturated. That's almost three-fourths of the recommended daily intake for saturated fat. The same amount of salmon gives you 34 grams of protein and 18 grams of fat, 4 of them saturated. A cup of cooked lentils has 18 grams of protein, but under 1 gram of fat.

So when choosing protein-rich foods, pay attention to what comes along with the protein. Vegetable sources of protein, such as beans, nuts, and whole grains, are excellent choices, and they offer healthy fiber, vitamins and minerals. The best animal protein choices are fish and poultry. If you are partial to red meat, stick with the leanest cuts, choose moderate portion sizes, and make it only an occasional part of your diet.

How Much Protein Do You Need?
It is important to get enough dietary protein. You need to eat protein every day, because your body doesn't store it the way it stores fats or carbohydrates. The average person needs 50 to 65 grams of protein each day. This is the amount in four ounces of meat and a cup of cottage cheese.

The idea of eating more protein has gained popularity in the past few years. Some people may think the way to build body muscle is to eat high-protein diets and use protein powders, supplements and shakes. But there’s no solid scientific evidence that most Americans need more protein. Most of us already get all we need. Some of us may even be eating much more than we need.

Proteins play a key role in our bodies. They make up about 15% of the average person’s body weight. You probably know proteins as the major component of muscle. Muscles flex arms and legs, contract our hearts and create waves in the walls of our intestines to move food along. All this muscle activity accounts for most of the energy our bodies burn. The more muscle you have, the more calories you burn and the more food you need to maintain your weight.

Proteins also perform crucial activities within all the cells of your body. They move molecules from one place to another, build structures, break down toxins and do countless other maintenance jobs. Proteins play an important structural role in cells as well, making up a sort of miniature skeleton.

Vegetarian food combinations that give you complete protein, for example, include rice and beans or peanut butter and bread. Eggs are also a good source of complete protein. People who don’t eat eggs or dairy products need to be particularly careful to get all the essential amino acids they need.

Proteins are actually chains of small molecules called amino acids. Some of these chains are constantly being broken down, and new ones are strung together to take their place. Your body can make some of these amino acid building blocks, but not all of them. The ones you can’t make are called essential amino acids.

Side Effects
A diet high in meat can contribute to high cholesterol levels or other diseases such as gout. A high-protein diet may also put a strain on the kidneys.