Black Pepper and Turmeric – This Combination Could Save Lives 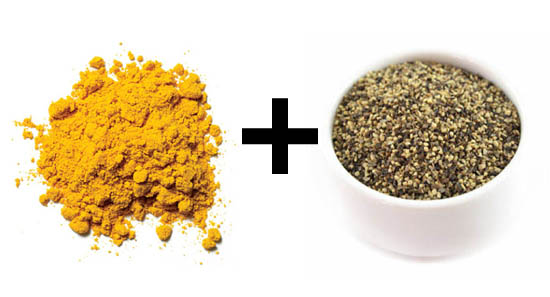 Historians from all around the world have produced evidence to show that apparently all primitive peoples used herbs-often in a sophisticated way. “Quinine from Cinchona bark was used to treat the symptoms of malaria long before the disease was identified, and the raw ingredients of a common aspirin tablet have been a popular painkiller for far longer than we have had access to tablet-making machinery. Indeed, today many pharmacological classes of drugs include a natural product prototype that we originally discovered through the study of traditional cures and folk knowledge of indigenous people.”

There’s a plant in South Asia called Adhatoda from adu meaning “goat,” and thoda meaning “not touch” because it’s so bitter even the goats won’t eat it. However, it has compounds that help open one’s airways and as such, Adhatoda tea has been used traditionally to treat asthma, where the leaves are steeped with black peppercorns. Leaves steeped with black peppercorns? That sounds gross to me—why would they do that? Because they’re smart. Back in 1928, scientists discovered what the people evidently already knew, that adding pepper increased the anti-asthmatic properties of the leaves. Black pepper alone didn’t work: it was the combination. And now we know why.

Just like approximately 5% of the spice turmeric is composed of an active compound called curcumin, about 5% of black pepper by weight is comprised of this compound called piperine. Curcumin is responsible for the yellow color of turmeric and piperine for the pungent flavor of pepper. Piperine is a potent inhibitor of drug metabolism. One of the ways our liver gets rid of foreign substances is making them water soluble so they can be more easily excreted. But this black pepper molecule inhibits that process.

And it doesn’t take much. If people are given a bunch of turmeric curcumin, within an hour there’s a little bump in the level in their blood stream. We don’t see a large increase because our liver is actively trying to get rid of it. But what if the process is suppressed by taking just a quarter teaspoon’s worth of black pepper? Then you see curcumin levels skyrocket. The same amount of curcumin consumed, but the bioavailability shoots up 2000%. Even just a little pinch of pepper—1/20th of a teaspoon—can significantly boost levels. And guess what a common ingredient in curry powder is besides turmeric? Black pepper.

Another way to boost the absorption of curcumin is to consume it in the whole food, turmeric root (fresh or dried as a powder) because natural oils found in turmeric root and turmeric powder can enhance the bioavailability of curcumin seven to eight fold. When eaten with fat, curcumin can be directly absorbed into the bloodstream through the lymphatic system thereby in part bypassing the liver.

Store-bought curry powders often contain relatively little turmeric (and very little curcumin). Furthermore, they typically get their sharp, spicy flavor from chilli, rather than black peppercorns. Therefore, if you want to reap the wonderful benefits of curcumin, using homemade curry powder rich in turmeric and black pepper is a good idea. Here's a simple recipe for homemade curry powder blend that provides generous amount of both curcumin and piperine:

Directions: Mix all the ingredients by stirring them in a small bowl. Store your homemade curry powder in an airtight container.