Krill are shrimp-like crustaceans that are approximately 1 to 6 centimeters long. They live is the ocean, where they feed mainly on phytoplankton. They're near the bottom of the food chain and are eaten by whales, seals, penguins, squid and fish.

Commercial fishing of krill occurs primarily in the Southern Ocean and the northern Pacific Ocean along the coasts of Canada and Japan.

Krill that are caught are used for aquaculture and aquarium feeds, sport fishing bait or they are eaten as food. In Japan, krill that's caught for food is called okiami.

Krill oil, the oil that's found naturally in krill, is extracted and sold as a nutritional supplement. It's sold in some health food stores and online in capsule form.

Another reason krill oil is becoming popular is because it contains an antioxidant called astaxanthin. The algae that krill eat produces the bright red pigment astaxanthin that gives krill and other crustaceans such as lobster and shrimp their reddish-pink color.

Antioxidants protect our body cells from damage from free radicals, unstable substances that are thought to contribute to certain chronic diseases. Unlike many other antioxidants, astaxanthin crosses the blood-brain barrier, where it could theoretically protect the eye, brain and central nervous system from free radical damage.

Why Do People Use Krill Oil
People use krill oil for the same reasons they use fish oil, flax oil or other omega-3 fatty acids. Unlike fish oil, krill oil doesn't cause fishy burps or an aftertaste, a common side effect of fish oil. Also, krill oil contains higher amounts of astaxanthin than fish oil. Here are some specific conditions for which it's used.

Inflammation
The results of a recent study have shown with a high level of certainty that Krill Oil, at a daily dose of 300 mg, may significantly inhibit inflammation by reducing C-reactive protein (CRP).

After taking Krill Oil 300 mg/day for a period of 7, 14, and 30 days, CRP was reduced 19.3%, 29.7% and 30.9%. In this study, 90 patients with cardiovascular disease, rheumatoid arthritis or osteoarthritis and with increased levels of C-reactive protein >1.0 mg/dl were evaluated. Patients were split into a Krill Oil group and those taking placebo.

Arthritis
A study in the Journal of the American College of Nutrition examined krill oil (300 mg daily) compared to a placebo and found that krill oil was effective at reducing arthritis symptoms and inflammation.

Anti Aging Benefits
One interpretation of the high antioxidant value of Krill Oil comes from Woman's World magazine: "Krill is a unique oil that is rich in Omega-3 fatty acid, which repairs aging cells so well, studies show it's up to 300 times more rejuvenating than vitamins A and E!"

This claim was derived from the ORAC (Oxygen Radical Absorbance Capacity) studies, which measure the antioxidant power of various nutrients. The ORAC Value chart below shows that Krill Oil has a value which is 300 times as high as either vitamin A or vitamin E, and 47 times higher than fish oil.

Krill oil should also be used with caution by people taking herbs and supplements that are thought to increase the risk of bleeding, such as ginkgo biloba and garlic.

How Krill Oil is Produced
Krill are small shrimp or prawn-like crustaceans, habitants of oceans off the West coast of Vancouver Island, Russia, Ukraine and Japan. 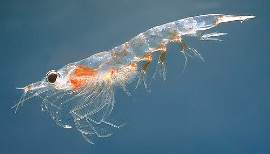 Approximate area of distribution at the Circumpolar in Antarctic waters is 35 million square kilometers. Approximately 90 species have been recognized, most of which range in length from 8 to 70 mm (mean length 16 mm.). Considering a population size of 500 million tons, Krill are the most important Zooplankton group in the world oceans after Copepods. Major predators are Baleen whales (blue, fin, mink), crabeater seals, fur seals, Adelie and macaroni penguins, petrels, fulmars and shearwaters, squid and fish. In Japan humans consume them as an ethnic delicacy. Euphasia Pacifica, commonly known as Krill, make up the order of Euphausiacea, subclass of Malacostraca, class of Crustacea and phylum of Anthropoda

The oil is extracted from the body of Krill with an innovative process of lipid extraction which produces a dehydrated residue. The most significant components of krill oil are the Omega-3 fatty acids, containing eicosapentaenoic acid (EPA) and docosahexaenoic acid (DHA), all-trans retinol or vitamin A, vitamin E, Astaxanthin and Canthaxanthin. Scientific evidence suggests that Omega-3 and antioxidants may have both preventive and therapeutic properties for systemic disease, mainly cardiovascular and neoplastic.

Krill Oil Safety
Omega-3 Fatty Acids - A recent review on the safety of omega-3 fatty acids by the US Food and Drug Administration concluded that a daily intake of EPA and DHA of up to 3 g is “generally recognized as safe”2. Dosages as high as 3 g to 8 g of omega 3 fatty acids per day (from 10 g to 27 g fish oil) show virtually no significant adverse effects3. The most common side effects observed with fish oil capsule consumption are complaints of a fishy taste and belching of fish flavors. At relatively higher doses, as with any oil, gastrointestinal complaints including loose stools have been reported.

Although there has never been a reported case of clinical bleeding attributed to fish oil consumption even during surgery, obvious consideration should be given to patients with bleeding disorders and patients taking blood thinners or anticoagulants.
Krill Oil - Long-term Krill Oil safety has been evaluated with a 6-month animal study using mice.7 Six months in mice lifespan is equivalent to 27 human years. The mice were fed krill oil amounting to 16.6% of their daily diet. Human equivalent dosage corresponds to 23.1 grams of krill oil (for a 70kg or 154 pound person) or 7 – 11 times the recommended dose. No adverse effects were reported. No pathological findings upon examination of brain, lungs, heart, stomach, pancreas, liver, kidneys, uterus / prostate, intestine, or skin.

The results of the present toxicity assessment confirm that Neptune Krill Oil™ can be considered as safe for human consumption even at 2 to 3 times the highest recommended dose.