Cyanobacteria, also known as blue-green algae is a bacteria that obtain their energy through photosynthesis.Cyanobacteria are know to have existed billions of years ago and all plants have evolved to produce sugars from sunlight (photosynthesis) learning from Cyanobacterias.

People in Mesoamerica have been using spirulina as a dietary supplement for centuries, as have inhabitants of some regions of Africa .

Algae in the Spirulina genus inhabit brackish lakes naturally, and they can also be easily cultivated to increase a yield of algae. Historically, people used spirulina to dress their food and to supplement meager diets, and it continues to be used for this purpose in some developing nations. Health food fans eat spirulina because they believe it is a valuable food supplement, consuming spirulina tablets and drinks, or sprinkling spirulina powder on their food.

Depending on the growing conditions, spirulina can be as much as 70% protein, and the protein is complete, rather than partial, as is the case with most proteins of plant origin. Spirulina also contains vitamins and nutrients like iron, calcium, vitamin B, magnesium, zinc, and beta carotene, among others. However, one must eat a significant serving of spirulina each day to really benefit from 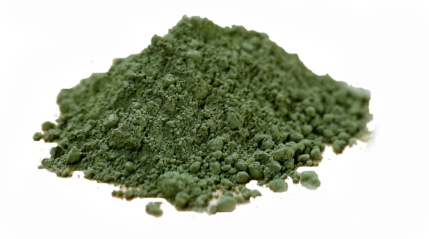 its nutritional value, rather than having a small sprinkle now and then.

Numerous claims are made about the miraculous abilities of spirulina to treat a range of medical problems. The National Institutes of Health in the United States generally give a “C” grade to most of these health claims, meaning that there is “unclear scientific evidence” to support use of spirulina to treat things like viral infections, malnutrition, diabetes, high cholesterol, and eye disorders, among others. However, this doesn't necessarily mean that eating spirulina is a bad thing, and most health food stores make spirulina readily available in an assortment of forms for people who want it.

Spirulina Benefits
Fact: It grows naturally in tropical and subtropical lakes with high pH (meaning high acidity) and high concentrations of carbonate and bicarbonate. It consumes a carbon dioxide (CO2), nitrogen oxide (NO) and/or sulfur oxide (SO) and releases Oxygen (O2).
Benefit: These properties (said above) have made it useful in naturally purifying polluted water bodies like lakes and rivers in tropical regions and also systems are being developed that purify air using Spirulina. The algae used for this process have high level of toxins in them and are not suitable for human consumption.

Fact: Spirulina Alga is one of the most adaptable organisms that can grow in harshest of climates from (32 to 45 degrees C) and has even

Proteins: 55-77% of the weight.
Benefit: It is a complete protein with all amino acids. It is one of the richest sources of protein - 300-400% more than beef or fish. Also the proteins from the algae are absorbed 400% more easily than from beef.

Vitamins: A, B1, B2, B3, B6, B9, B12, C, D, E.
Benefit: Almost all required vitamins are found in this algae and not only that they are very rich in them. For example it has 900% more beta-carotene/Vitamin A than in carrots. All vitamins constitute to a very healthy well being.

Photosynthetic Pigments: chlorophyll-a, xanthophyll, beta-carotene, echinenone, myxoxanthophyll, zeaxanthin, canthaxanthin, diatoxanthin, 3'-hydroxyechinenone, beta-cryptoxanthin, oscillaxanthin, phycobiliproteins c-phycocyanin and allophycocyanin.
Benefit: The high levels of these elements explain Spirulina algaes ability to thwart cancer colonies. It has the gift to improve your bodies natural immune system, that can help to battle cancer cells and other diseases like the common cold or HIV. Japanese have long been using Spirulina to cure/reduce effects of cancer. Russia is said to have used Spirulina to improve the immunity of children affected by radiation from Chernobyl accident. 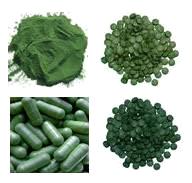 This nutrient, often called a superfood for its high nutritional and medicinal value, is generally safe for children and adults. The supplements typically come in capsule, tablet, tincture or powder form. Spirulina supplements have been used to treat or mitigate conditions such as glaucoma, premature aging, liver problems, and diabetes, among many others. Spirulina is also said to be a cancer inhibitor, body detoxifier, and an antimicrobial agent.

One benefit of the spirulina dietary supplement is how it can fit into a busy lifestyle. Spirulina can easily be added to food or smoothies, or pills may be swallowed by mouth. The ability to add it to food and smoothies also makes spirulina easy to slip into children’s diets unnoticed.

There are several spirulina supplement brands available in stores and online for basic nutrition or targeted needs. Some have been formulated to protect the body from the damaging effects of free radicals by adding antioxidants and carotenoids. There are also organic spirulina supplements on the market that are grown and harvested with no pesticides or herbicides. Some formulations target people with serious allergies by removing ingredients such as corn, dairy, soy, egg and gluten.

Spirulina is a naturally low-fat source of vegetable protein, which can be important to those looking to increase their protein intake without adding other food sources or calories. Because of this, spirulina has been widely used by vegetarians. Spirulina supplements are mostly well-rounded by naturally offering high concentrations of such nutrients as iron, many B vitamins, phycocyanin, and phytonutrients such as chlorophyll, which is a plant substance very similar to human blood cells. Spirulina also contains important healthful acids, including the nucleic acids RNA and DNA, nine essential amino acids, linoleic and arachidonic acids, as well as gamma-linolenic acid (GLA), which is an essential polyunsaturated fatty acid also found in primrose oil.

Spirulina Side Effects
Due to the high concentrations of proteins the body has to work extra hard to burn them and hence produces more heat. Always drink atleast 1 litre of extra water.
The new nutrient rich supplement might shock the digestive system and lead to temperary stomach aches. Always drink atleast 1 litre of extra water.
- Taking high doses of Spirulina might cause dizzyness.
- Might cause itching or burning sensation to skin.
- Might cause allergies.
Spirulina only diet (as a food source) might lead to liver failure or even worse side effects. Always consult a doctor before going on such diets.

Spirulina is THE complete food. NASA upon testing it found 1 kg of Spirulina nutritionally equal to 1000 kgs of assorted vegetables. They have chosen to use it for astronauts as food in space, and even plans to grow and harvest it in space stations in the near future.

The United Nations Organisation (UNO) in its World Food Conference of 1974 declared Spirulina as 'the best food for tomorrow.' World Health Organisation (WHO) has hailed Spirulina 'the greatest super food on earth.' These organizations consider Spirulina as an integral part of their plans to alleviate poverty.