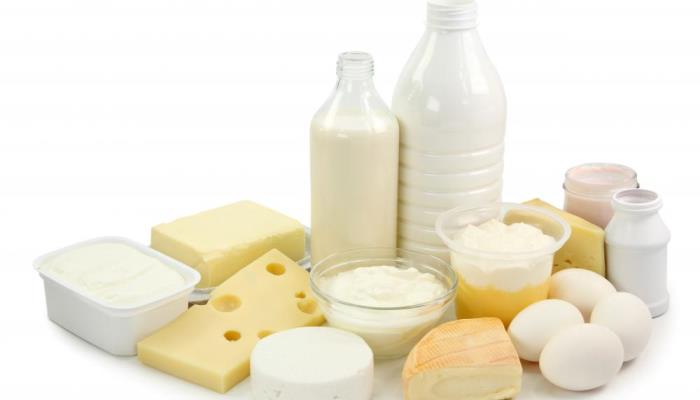 The term milk is also used for whitish non-animal substitutes such as soy milk, rice milk, almond milk, and coconut milk. Even the regurgitated substance secreted by glands in the mucosa of their upper digestive tract which pigeons feed their young is called crop milk though it bears little resemblance to mammalian milk.

Food products
In many cultures of the world, especially the Western world, humans continue to consume milk beyond infancy, using the milk of otheranimals (especially cattle, goats and sheep) as a food product. For millennia, cow's milk has been processed into dairy products such as cream, butter, yogurt, kefir, ice cream, and especially the more durable and easily transportable product, cheese. Modern industrial processes produce casein, whey protein, lactose, condensed milk, powdered milk, and many other food-additive and industrial products.

Humans are an exception in the natural world for consuming milk past infancy, despite the fact that more than 75% of adult humans show some degree (some as little as 5%) of lactose intolerance, a characteristic that is more prevalent among individuals of African or Asian descent. The sugar lactose is found only in milk, forsythia flowers, and a few tropical shrubs. The enzyme needed to digest lactose, lactase, reaches its highest levels in the small intestines after birth and then begins a slow decline unless milk is consumed regularly. On the other hand, those groups that do continue to tolerate milk often have exercised great creativity in using the milk of domesticated ungulates, not only of cattle, but also sheep, goats, yaks, water buffalo, horses, and camels. The largest producer and consumer of cattle and buffalo milk in the world is India.

Cheese contains the same beneficial nutrients as milk, but most cheeses contain much more saturated fat and high levels of added salt, so it's important to only eat full-fat cheese occasionally and in small portions.

Yoghurt is rich in protein and vitamin B2: essentially the same nutrients as in milk. Some varieties contain living bacteria that are healthy for your digestive system (probiotics). Yoghurt can be made from whole or low fat milk, but be careful. Fruit yoghurts often contain added sugar. Low fat doesn't necessarily mean low calories. If you're watching your weight, look for 'diet' versions, or make your own by mixing fruit with natural, low fat, unsweetened yoghurt. Check out the labels of packs for details.

The importance of calcium
Calcium is a mineral that helps build strong bones and teeth, regulates muscle contraction (including the heartbeat) and makes sure the blood is clotting normally. Milk and dairy products have long been held as an important source of calcium, although more recently the role and safety of dairy calcium sources have been questioned by some scientists and more research is needed to draw a firm conclusion.

More importantly, research also suggests that calcium in your diet is less important in developing healthy bones than vitamin D (from your 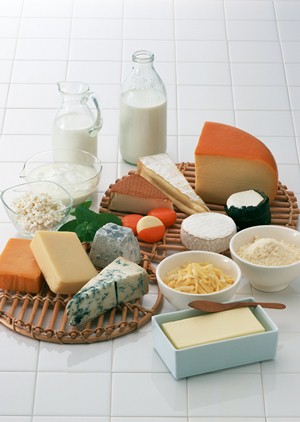 daily diet or from the sun's effect on the skin). Similarly, sufficient exercise is now seen as another vital factor in maintaining healthy bone structure and density - concerns have been voiced that a lack of excercise in growing children will have a detrimental effect on their bones.

Calcium can continue strengthening your bones until the age of 20 to 25 when peak bone mass is reached. After this point, your bones can only maintain or lose their density and grow weaker as a natural part of the ageing process. Inadequate dietary calcium intake before this age can increase the risk of brittle bone disease and osteoporosis, as calcium is drawn from the bones as a reserve.

Each year in the UK, over £1.7 billion is spent on treating osteoporosis. Health professionals estimate that one in two women and one in five men over the age of 50 in the UK will break a bone, mainly because of osteoporosis. Women are more affected as they have less bone mass than men, and may lose it faster as they get older, especially after the menopause when falling oestrogen levels result in the loss of the protective effect of oestrogen on bone density.

Why children need calcium
Calcium is an essential nutrient for all children to help grow strong bones and reduce the risk of developing osteoporosis when they're older. But many children and teenagers don't receive their recommended daily intake. Encouraging children and adolescents to drink more milk, rather than other drinks, can provide not only calcium, but also important proteins, carbohydrates and micronutrients.

Calcium for vegans and the lactose intolerant
If your diet excludes milk and dairy products, or if you can't tolerate milk sugar lactose, then you need to look for calcium alternatives. Other dietary sources of the mineral include:

calcium-enriched soya milks, yoghurts and cheeses
dark green leafy vegetables, such as spinach, broccoli and watercress
almonds or sesame seeds – try as a topping on salads, cereals or desserts
dried fruits - apricots, dates and figs all contain small amounts of calcium
(for non vegans) fish such as sardines and anchovies, especially the bones

Three-a-day
As dairy products are such a rich source of calcium, three portions of dairy products each day should be sufficient to meet your body's calcium needs. Try to choose low or reduced fat versions to avoid too much unhealthy saturated fat.

The following are examples of individual servings: