Green tea is made from the dried leaves of Camellia sinensis , a perennial evergreen shrub. Green tea has a long history of use, dating back to China approximately 5,000 years ago. Green tea, black tea, and oolong tea are all derived from the same plant.

cut, gunpowder is rolled), and the processing method (for example, black, green, or oolong). India and Sri Lanka are the major producers of green tea.

Historically, tea has been served as a part of various ceremonies and has been used to stay alert during long meditations. A legend in India describes the story of Prince Siddhartha Gautama, the founder of Buddhism, who tore off his eyelids in frustration at his inability to stay awake during meditation while journeying through China. A tea plant is said to have sprouted from the spot where his eyelids fell, providing him with the ability to stay awake, meditate, and reach enlightenment. Turkish traders reportedly introduced tea to Western cultures in the 6th Century.

Uses based on scientific evidence Grade:
Genital warts
Polyphenon E®, a proprietary extract of green tea, has been approved in the United States, for external topical use as a prescription for genital warts caused by human papilloma virus.
Anxiety
L-theanine is a predominant amino acid found in green tea. Preliminary research exists on the effects of this amino acid in comparison with the prescription drug alprazolam on experimentally induced anxiety. No benefit was found.
Arthritis
Research indicates that green tea may benefit arthritis by reducing inflammation and slowing cartilage breakdown. Further studies are required before a recommendation can be made.
Asthma
Research has shown caffeine to cause improvements in airflow to the lungs (bronchodilation). However, it is not clear if caffeine or tea use has significant benefits in people with asthma. Better research is needed in this area before a strong conclusion can be drawn.
Cancer (general)
Overall, the relationship of green tea consumption and human cancer remains inconclusive. One clinical trial showed minimal benefit using green tea extract capsules for the treatment of hormone refractory prostate cancer. Further research is needed before a recommendation can be made.
Cardiovascular conditions
There is early suggestive evidence that regular intake of green tea may reduce the risk of heart attack or atherosclerosis (clogged arteries). Further well-designed clinical trials are needed before a firm recommendation can be made in this area.
Common cold prevention
In humans, preliminary date suggests that a specific formulation of green tea may help prevent cold and flu symptoms. Further well-designed clinical trials are needed to confirm these results.
Dental cavity prevention
There is limited study of tea as a gargle (mouthwash) for the prevention of dental cavities (caries). It is not clear if this is a beneficial therapy.
Diabetes
More studies are required to determine if green tea and polyphenols have any therapeutic benefit for diabetes prevention or treatment.
Fertility
Early research using a combination product called FertilityBlend has been associated with some success in helping women to conceive. Further well-designed research on green tea alone for this use is needed before a strong conclusion can be drawn.
High cholesterol
Laboratory studies, animal studies, and limited human research suggest possible effects of green tea on cholesterol levels. Better human evidence is necessary in this area.
Hypertension
Green tea has been shown to increase or have no effect on blood pressure in several studies in humans.
Hypertriglyceridemia
Laboratory, animal, and limited human research suggest possible effects of green tea on triglyceride levels. Better human evidence is necessary in this area.
Menopausal symptoms
A study conducted in healthy postmenopausal women showed that a morning/evening menopausal formula containing green tea was effective in relieving menopausal symptoms including hot flashes and sleep disturbance. Further studies are needed to confirm these results.
Mental performance/alertness
Several preliminary studies have examined the effects of caffeine, tea, or coffee use on short and long-term memory and cognition. It remains unclear if tea is beneficial for this use. Limited, low-quality research reports that the use of green tea may improve cognition and sense of alertness. Green tea contains caffeine, which is a stimulant.
Photoprotection
There is limited animal and human study of green tea as a protective agent of skin from ultraviolet light skin injury. Some study results conflict. Comparisons have not been made with well-established forms of sun protection such as ultraviolet protective sunscreen. The effects of green tea on skin damage caused by the sun remain unclear.
Viral infection (human T-cell lymphocytic virus)
Preliminary research suggests green tea decreases viral load in carriers of the HTLV-1 virus. Additional well-designed controlled research is needed before a recommendation can be made for or against green tea in the treatment of HTLV-1 carriers.
Weight loss (maintenance)
There are several small human studies addressing the use of green tea extract (GTE) capsules for weight loss or weight maintenance in overweight or average weight individuals. Study results are mixed. Better research is needed before a strong recommendation can be made in this area.

Uses based on tradition or theory
The below uses are based on tradition or scientific theories. They often have not been thoroughly tested in humans, and safety and effectiveness have not always been proven. Some of these conditions are potentially serious, and should be evaluated by a qualified healthcare provider. 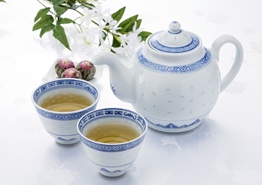