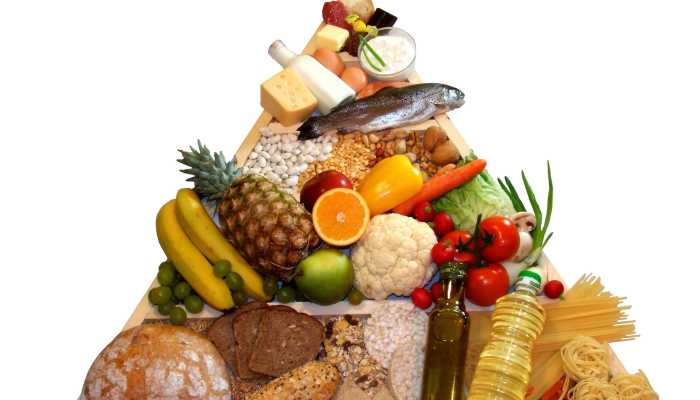 Food is any substance, composed of carbohydrates, water, fats and/or proteins, that is either eaten or drunk by any animal,including humans, for nutrition or pleasure. Items considered food may be sourced from plants, animals or another kingdom such as fungus. Although many human cultures sought food items through hunting and gathering, today most cultures use farming, ranching, and fishing, with hunting, foraging and other methods of a local nature included but playing a minor role

Many traditions have a recognizable cuisine, a specific set of cooking traditions using various spices or combinations of flavors unique to that culture. Other differences include preferences (hot or cold, spicy etc.), and practices, the study of which is known as gastronomy. Many cultures have diversified their foods by means of preparation, cooking methods and manufacturing. This also includes a complex food trade which helps the cultures to economically survive by-way-of food, not just by consumption. Some popular types of ethnic foods include Italian, French, Japanese, Chinese, American, Thai and Indian. Various cultures throughout the world study the dietary analysis of food habits. While evolutionarily speaking, as opposed to culturally, humans are omnivores, religion and social constructs such as morality, activism or environmentalism will often affect which foods they will consume. Food is eaten and typically enjoyed through the sense of taste, the perception of flavor from eating and drinking. Certain tastes are more enjoyable for evolutionary purposes while others are not.

In popular culture, the production of mass food production, specifically meats such as chicken and beef, has come under fire from various documentaries documenting the mass slaughter and poor treatment of animals, most recently Food, Inc, often for easier revenues from large corporations. Along with a current trend towards environmentalism, people in Western culture have had an increasing trend towards consumerism which is the use of herbal supplements, foods for a specific group of person (such as dieters, women or athletes), the use of functional foods (fortified foods, such as omega-3 eggs), and a more ethnically diverse diet.

Foods that spoil easily, such as meats, dairy and seafood, must be prepared a certain way as to not contaminate the people for whom they are prepared. As such, the general rule of thumb is that cold foods (such as dairy products) should be kept cold and hot foods (such as soup) should be kept hot until storage. Cold meats, such as chicken, that are to be cooked should not be placed at room temperature for thawing, at the risk of dangerous bacterial growth, such as salmonella or E. coli. Some foods may have a long history of use that may be distinct to certain cultures over another.

Food sources
Almost all foods are of plant or animal origin. Some plants, such as Nori, is an underwater plant that is eaten with sushi in Japanese 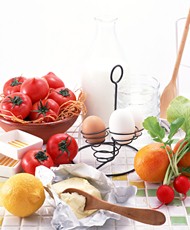 cuisine. Seafood refers to underwater life, especially fish, for food sources. However water and salt (both inorganic substances) are important parts of the human diet. Salt is usually added as a flavoring but is typically used as a preservative in canned foods. Salt has a long history of being used to preserve meats and fish to the point where it has been used as a means of payment in the past.

Other foods not from animal or plant sources include various edible fungi, such as mushrooms. Fungi and ambient bacteria are used in the preparation of fermented and pickled foods such as leavened bread, alcoholic drinks, cheese, pickles, and yogurt. blue-green algae (cyanobacteria) such as Spirulina. Additionally baking soda, another inorganic substance, is used in food preparation. 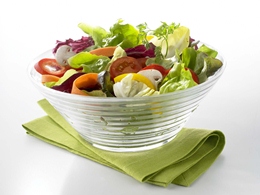 Animals, specifically humans, have 5 different types of tastes: sweet, sour, salty, bitter and umami. As animals have evolved, the tastes that provide the most energy (sugar and fats) are the most pleasant to eat while others, such as bitter, are not enjoyable for evolutionary purposes. Water has no taste as saliva is mostly composed of it. Fats on the other hand, especially saturated fats, are thicker and rich and are thus enjoyable to eat.

Sweet
3D structure of cellulose, a beta-glucan polysaccharide.
Generally regarded as the most pleasant taste, sweetness is almost always caused by a type of simple sugar such as glucose and

fructose, or disaccharides such as sucrose, a molecule of both combined. Complex carbohydrates are long chains and thus do not have the sweet taste. Artificial sweeteners such as sucralose are used to mimic the sugar molecule, creating the sensation of sweet, without the calories. Other types of sugar include raw sugar which is known for its amber color, as it is unprocessed. As sugar is vital for energy and survival, the taste of sugar is pleasant.

The stevia plant contains a compound known as steviol which extracted, has 300 times the sweetness of sugar while having minimal impact on blood sugar.

The sour taste may be regarded as unpleasant. Sourness is caused by the taste of acids, such as vinegar or ethanol in alcoholicbeverages. Sour foods include citrus, specifically lemons, limes and to a lesser degree, oranges. Sour is evolutionarily significant as it is a sign for a food that may have gone rancid due to bacteria. Most foods however, are slightly acidic as they help stimulate the taste buds and enhance flavor.

Salty
Saltiness is the taste of sodium or salt. It is found in almost every food in low to moderate proportions to enhance flavor, although eating

pure salt is extremely unpleasant. There are many different types of salt: sea salt, fleur de sel, mined salt and grey salt to name a few. Its significance is that the body needs and maintains a delicate electrolyte balance (see kidney). Too much salt with little water will result in dehydration and death so the taste of salt is also significant for its evolution. Modern salts are iodized, meaning they include iodine, a nutrient that promotes thyroid function. Some canned foods, notably soups or packaged broths, tend to be high in salt as a means of preserving the food longer. Salt works as a preservative because salt promotes water excretion in microorganisms such as bacteria. Similarly, dried foods also promote food safety.

The lemon has a distinct bitter and sour taste that can be used in both sweet and savory dishes, such as a lemon tart or veal piccata. Bitterness is a highly unpleasant taste characterized by having a sharp, pungent taste. Dark, unsweetened chocolate, coffee (caffeine), lemon rind and some types of fruit are known to be bitter. 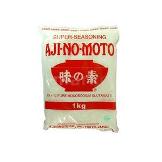 Umami, the Japanese word for delicious, is the least known in popular culture in Western culture but has a long tradition in Asian cuisine. Umami is the taste of glutamates, especially monosodium glutamate (MSG). It is characterized as savory, meaty and delicious. Salmon and mushrooms are foods high in umami.

It is known that when presented with food, the consumer "eats" first with their eyes, a universal psychological phenomenon. Food presented in a clean and appetizing way will encourage a good taste, possibly even if it actually tastes average or so-so. Similarly, food is usually garnished with a main ingredient in the dish so that the consumer will know what to expect when prior to consumption. For example, a lemon curd would appropriately be garnished with some lemon slices so that the eater will anticipate a satisfying lemon taste. Consequentially, messy or poorly 'plated' dishes, such as drippings, burntness or the inclusion of any hair are not appetizing to eat as they psychologically trigger thoughts of uncleanliness and potential contamination, especially if one has a previously foreseen expected knowledge of how the plate should look.

Texture plays a crucial role in the enjoyment of eating foods. Contrasts in textures, such as some crunchy in an otherwise smooth dish, drastically increase the appeal of eating it. Common examples of this include adding granola to yogurt and adding croutons to a salad. Other examples include toasting breads to enhance their crunchiness so that it promotes an increase in difference in texture, from a smooth topping, such as jam, butter or cream cheese.