The skin is the outer covering of the body. In humans, it is the largest organ of the integumentary system made up of multiple layers of ectodermal tissue, and guards the underlying muscles, bones, ligaments and internal organs. Human skin is similar to that of most other mammals except that it is not protected by a pelt and appears hairless though in fact nearly all human skin is covered with hair follicles. There are two general types of skin, hairy and glabrous skin. The adjective cutaneous literally means "of the skin" (from Latin cutis, skin).

Because it interfaces with the environment, skin plays a key role in protecting (the body) against pathogens and excessive water loss. Its other functions are insulation, temperature regulation, sensation, synthesis of vitamin D, and the protection of vitamin B folates. Severely damaged skin will try to heal by forming scar tissue. This is often discolored and depigmented.

In humans, skin pigmentation varies among populations, and skin type can range from dry to oily. Such skin variety provides a rich and 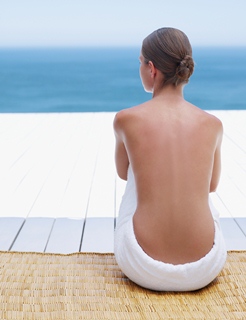 diverse habit for bacteria which number roughly a 1000 species from 19 phyla.

The skin supports its own ecosystems of microorganisms, including yeasts and bacteria, which cannot be removed by any amount of cleaning. Estimates place the number of individual bacteria on the surface of one square inch (6.5 square cm) of human skin at 50 million, though this figure varies greatly over the average 20 square feet (1.9 m2) of human skin. Oily surfaces, such as the face, may contain over 500 million bacteria per square inch (6.5 cm²). Despite these vast quantities, all of the bacteria found on the skin's surface would fit into a volume the size of a pea. In general, the microorganisms keep one another in check and are part of a healthy skin. When the balance is disturbed, there may be an overgrowth and infection, such as when antibiotics kill microbes, resulting in an overgrowth of yeast. The skin is continuous with the inner epithelial lining of the body at the orifices, each of which supports its own complement of microbes.

Proper skin hygiene is important because unclean skin favors the development of pathogenic organisms. The dead cells that continually slough off the epidermis mix with the secretions of the sweat and sebaceous glands and the dust found on the skin form a filthy layer on its surface. If not washed away, the slurry of sweat and sebaceous secretions mixed with dirt and dead skin is decomposed by bacterial flora, producing a foul smell. Functions of the skin are disturbed when it is excessively dirty; it becomes more easily damaged, the release of antibacterial compounds decreases, and dirty skin is more prone to develop infections.

Oily Skin
Oily skin is caused by over-active sebaceous glands, that produce a substance called sebum, a naturally healthy skin lubricant. When the skin produces excessive sebum, it becomes heavy and thick in texture. Oily skin is typified by shininess, blemishes and pimples. The oily-skin type is not necessarily bad, since such skin is less prone to wrinkling, or other signs of aging, because the oil helps to keep needed moisture locked into the epidermis (outermost layer of skin).

The negative aspect of the oily-skin type is that oily complexions are especially susceptible to clogged pores, blackheads, and buildup of dead skin cells on the surface of the skin. Oily skin can be sallow and rough in texture and tends to have large, clearly visible pores everywhere, except around the eyes and neck.

The goal of treating oily skin is to remove excess surface sebum without complete removal of skin lipids. Severe degreasing treatment can foster an actual worsening of sebum secretion, which defeats the aim of the cleansing. A method of cleansing oily skin is to cleanse with a natural face cleanser formulated especially for oily skin. The cleansers pH should be 4.5 - 5.5, since the skin's pH value is approximately 5.4. Gel cleansers work best on oily skin. Oily skin products should contain very little natural oils. They should not contain waxes or other synthetic lipid agents that could aggravate the oily condition of the skin. A toning lotion should also be natural and have a pH of 4.5-5.5 and formulated especially to help balance and hydrate oily skin. Some cleansing products have lower concentrations of hydroxy acids, which remove dead cells from the upper levels of the stratum corneum. Those products should be used on a regular basis to work adequately.

In cases of excessive output of sebum, there have been anecdotal reports of successful control using dietary supplementation of niacin (vitamin B3) at a dosage of 500 mg to 1000 mg a day.

Aging
As skin ages, it becomes thinner and more easily damaged. Intensifying this effect is the decreasing ability of skin to heal itself as a person ages. Among other things, skin aging is noted by a decrease in volume and elasticity. There are many internal and external causes to skin aging. For example: Aging skin receives less blood flow and lower glandular activity. Cortisol causes degradation of collagen, accelerating skin aging.

Skin flora
The human skin is a rich environment for microbes. Around 1000 species of bacteria from 19 bacterial phyla have been found. Most come from only four phyla: Actinobacteria (51.8%), Firmicutes (24.4%), Proteobacteria (16.5%), and Bacteroidetes (6.3%). Propionibacteria and Staphylococci species were the main species in sebaceous areas. There are three main ecological areas: moist, dry and sebaceous. In moist places on the body Corynebacteria together with Staphylococci dominate. In dry areas, there is a mixture of species but dominated by b-Proteobacteria and Flavobacteriales. Ecologically, sebaceous areas had greater species richness than moist and dry one. The areas with least similarity between people in species were the spaces between fingers, the spaces between toes, axillae, and umbilical cord stump. Most similarly were beside the nostril, nares (inside the nostril), and on the back.

Reflecting upon the diversity of the human skin researchers on the human skin microbiome have observed: "hairy, moist underarms lie a short distance from smooth dry forearms, but these two niches are likely as ecologically dissimilar as rainforests are to deserts."

The NIH has been launched the Human Microbiome Project to characterize the human microbiota which includes that on the skin and the role of this microbiome in health and disease.

Sunblock and Sunscreen
Although some believe that sunblock and sunscreen are both the same, they are not, although they have similar properties and are both important in caring of the skin. 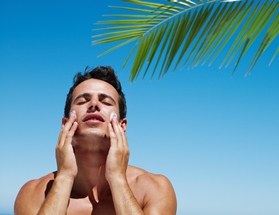 Sunblock Sunblock is opaque and is stronger than sunscreen since it is able to block majority of the UVA/UVB rays and radiation from the sun, thus not having to be reapplied several times a day. Titanium Dioxide and Zinc Oxide are two of the important ingredients in sunblock.

Sunscreen Sunscreen is more transparent once applied to the skin and also has the ability to protect against UVA/UVB rays as well. Although the sunscreen's ingredients have the ability to break down at a faster rate once exposed to sunlight, and some of the radiation is able to penetrate to the skin. In order for sunscreen to be more effective you'll have to consistently reapply and use a higher spf.

Cosmetics should be used carefully on the skin because these may cause allergic reactions. Each season requires suitable clothing in order to facilitate the evaporation of the sweat. Sunlight, water and air play an important role in keeping the skin healthy.