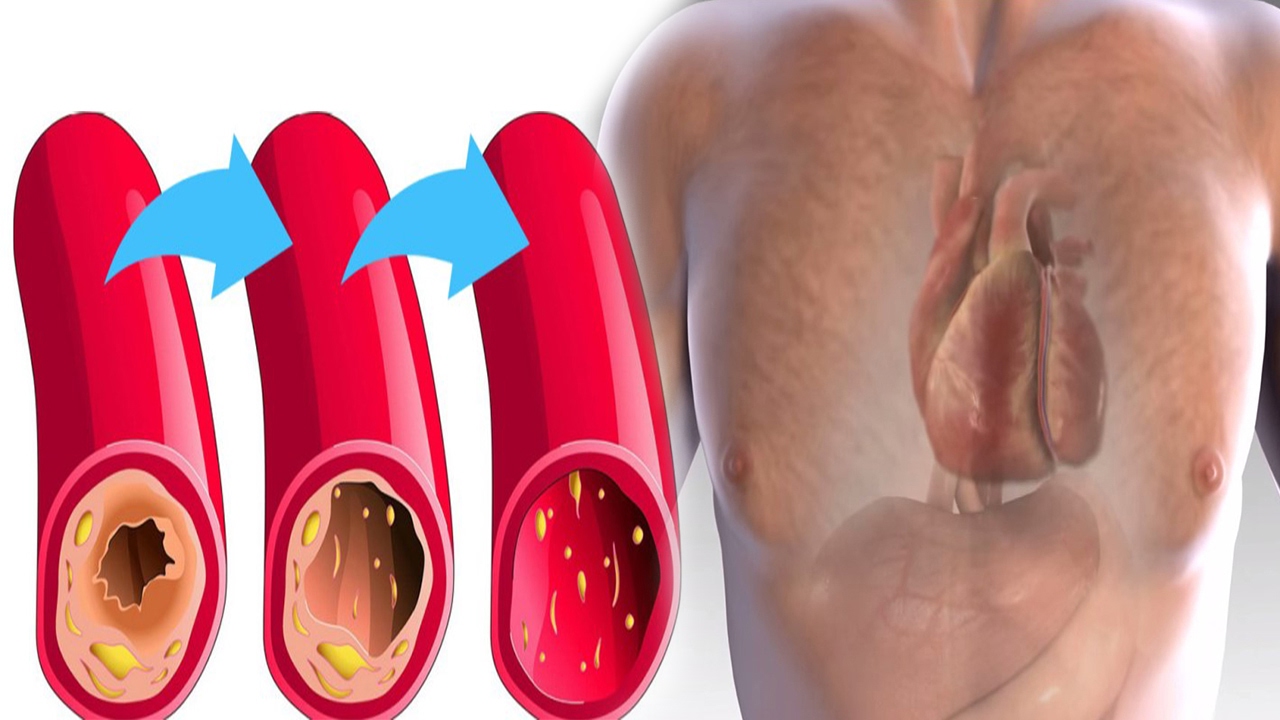 Your arteries are blood vessels responsible for the transportation of oxygen-rich blood from the heart to the rest of the body. A normal artery will be strong, flexible, and elastic. On the other hand, progressive clogging of the arteries is a serious condition called atherosclerosis. It is the major cause of cardiovascular disease, which includes peripheral vascular disease, strokes, and heart attacks.

In the U.S., cardiovascular disease is considered the leading cause of death, claiming approximately 600,000 lives every year. It is also known as a silent killer since the condition does not cause any symptoms. That is, until the problem becomes more severe.
Symptoms of Clogged Arteries

The symptoms of clogged arteries likely depend on the type of arteries being affected.

Carotid arteries: When you have clogged arteries in your brain, it is a condition called carotid artery disease. Plaque will block or narrow the carotid arteries, and signs of a stroke may be present. Symptoms include breathing problems, sudden weakness, confusion, severe headaches, loss of consciousness, blurry vision, trouble with speech, paralysis, trouble walking,dizziness, unexplained falls, and loss of coordination or balance.

Coronary arteries: When the arteries in the heart are clogged, it is called coronary heart disease, or CHD. In this case, plaque will block or narrow the coronary arteries when the heart muscle fails to get enough blood. As a result, chest pain, known as angina will occur. It feels like pressure is squeezing your chest, but you may also feel it in your jaw, neck, arms, shoulders, or back. Angina also sometimes feels like indigestion. Emotional stress will also often trigger angina. Other CHD symptoms include heartbeat problems and shortness of breath.

Renal arteries: Chronic kidney disease will develop from clogged renal arteries in the kidneys. Over time, chronic kidney disease can slowly impair kidney function. There are no symptoms early in kidney disease; however, as the condition worsens, it can lead to loss of appetite, nausea, tiredness, concentration problems, numbness or itchiness, and swelling in the feet or hands. Other symptoms include kidney failure and high blood pressure.

Peripheral arteries: Peripheral arterial disease will result from plaque buildup in the arms, legs, and pelvis. These arteries are known as peripheral arteries, and if they are blocked or narrowed, you may experience pain or numbness. On occasion, there are also dangerous infections.

What Causes Your Arteries to Get Blocked?

Atherosclerosis is often referred to as the hardening, thickening, and narrowing of the arteries. A thin layer of endothelial cells that help keep the inside of your arteries smooth and toned lines your arteries. This process allows your blood to keep flowing.

However, several factors will damage the endothelial cells, including platelet cells, increased homocysteine levels, and free radicals from toxins and antioxidant deficiency. Also, vitamin C deficiency and homocysteine will damage the arteries from degradation of a gel-like substance called the ground substance. It is found between the cells, and helps maintain the integrity of the epithelial cell barrier.

Plaque will accumulate when various substances are unable to migrate out of the atherosclerotic lesion. These substances include fat, calcium, toxic metals, cellular waste, and cholesterol such as LDL (low density lipoprotein) cholesterol. A material involved in blood clotting called fibrin is also accumulated when arteries are clogged.

While the exact cause of clogged arteries is a mystery, evidence shows that atherosclerosis is a complex and slow condition that may begin in childhood and develop as you get older. Certain factors may damage your arteries’ inner layers, including smoking, high blood pressure, type 1 diabetes, type 2 diabetes, and insulin resistance.

Atherosclerosis can also be caused by oxidative stress through depletion of vitamin C or other antioxidants. Nutrient deficiencies or imbalances may also lead to atherosclerosis. They may include magnesium, potassium, fiber, antioxidants, and methyl donators. Dietary factors also include a diet high in sugar, processed starches, and damaged fats from overheating oils.
10 Natural Foods to Unclog Your Arties

Want to know how to unclog your arteries and reverse atherosclerosis? Your doctor may prescribe cholesterol-lowering drugs like statins drugs, or beta-blockers that lower blood pressure. These will help slow the progression of plaque buildup.

However, there are also plenty of well-researched foods that can unclog your arteries naturally instead:

Turmeric is a popular spice used in Indian and Ayurvedic cooking. The primary polyphenol in turmeric called curcumin has long been known for its cardioprotective effects. Turmeric extract is thought to reduce LDL cholesterol and the buildup of plaque in the arteries.

A review published in the journal Nutrition in 1997 found that clinical trials on garlic had positive effects in the prevention and treatment of atherosclerosis. Another study from 1999 also found that garlic can reduce the risk of stroke and heart attack by more than 50%. Garlic is thought to help against strokes and heart attacks since garlic acts as a blood thinner.

Want to know how to clean your arteries naturally? Use ginger! Ginger has incredible anti-inflammatory and anti-oxidative effects. Ginger contains heart-protective compounds likeshogaols and gingerols, which can effectively prevent plaque buildup and unclog arteries by reducing total cholesterol. According to a study published in the Journal of Nutrition in 2000, researchers found that ginger extract could reduce aortic atherosclerotic lesion areas, cholesterol and triglycerides in the blood, LDL-linked fat peroxides, and LDL aggregation.

Something spicy can also help unclog your arteries. The compound capsaicin found in cayenne pepper can help reduce LDL cholesterol in the blood. Cayenne pepper can also lower your risk of stroke and heart attack, and improve blood circulation. Also, highly-active antiretroviral therapy (HAART) with HIV protease inhibitor ritonavir is associated with accelerating atherosclerosis and pulmonary artery hypertension. A study published in 2009 found that capsaicin could help prevent pulmonary and vascular complications associated with HAART drugs.

Adding lemon juice in your morning water is a healthy habit and good for your heart. Lemon is known to reduce blood cholesterol levels, and it helps the arteries by preventing oxidative damage. Lemons are also a great source of the potent antioxidant vitamin C. High doses of vitamin C have been found to strengthen arteries, reduce total cholesterol, increase high-density lipoprotein (HDL), inhibit platelet aggregation, and reduce inflammation.

Cinnamon can help reduce many risk factors associated with atherosclerosis and heart disease. A 2003 study published in the journal Diabetes Care in 2003 found that either one gram, three grams, or six grams of cinnamon daily can lower glucose, triglycerides, LDL cholesterol, and total cholesterol in type 2 diabetics. The study observed 60 diabetics for a 40-day period. Researchers concluded that cinnamon can help reduce the risk factors of cardiovascular disease.

Flaxseed is another important food for heart health. Ground flaxseed can help unclog arteries with high fiber. It is also a good source of alpha-linolenic acide, an omega-3 acid that can lower inflammation and blood pressure. In turn, arteries will not become clogged. In a 1997 study published in the journal Atherosclerosis, researchers found that flaxseed lowered the development of aortic atherosclerosis by 46% in rabbits.

Researchers concluded that modest flaxseed supplementation is an effective treatment for reducing hypercholesterolemic atherosclerosis. Also, it is a good idea to grind your flaxseed. They contain greater amounts of omega-3. On the other hand, the polyunsaturated fats in pre-ground flaxseeds will break down over longer exposure to oxygen, and it can become rancid.

Kimchi is a popular probiotic Korean recipe that includes fermented cabbage and hot peppers that has been found to slow the atherosclerotic process. A 2007 study published in the Journal of Agricultural and Food Chemistry found that an active compound in kimchi called 3-94-hydroxy-3,5-dimethoxyphenyl can help prevent the development of aortic atherosclerosis in high-cholesterol-fed rabbits. Fermented cabbage has also found to degrade toxic chemicals, including bisphenol A and the insecticide chlorpyrifos.

Sesame seeds can help unclog a blocked artery. Evidence shows that they can help prevent the progression of atherosclerosis. A three-month animal study published in the Journal of Medicinal Food in 2006 suggests that the fatty acid content in sesame oil could effectively inhibit atherosclerosis lesion formation, blood cholesterol, triglycerides, and LDL cholesterol levels in mice.

The high antioxidant content and punicic acid in pomegranate juice are thought to help decrease plaque formation, unclog arteries, and fight atherosclerosis. Pomegranate juice also contains important nutrients for heart health, such as magnesium and selenium. In a randomized, double-blind, parallel study published in the American Journal of Cardiology in 2009, researchers found that drinking 240 milliliters (ml) of pomegranate juice daily for up to 18 months slowed the progression of carotid artery disease for patients at risk of coronary health disease.