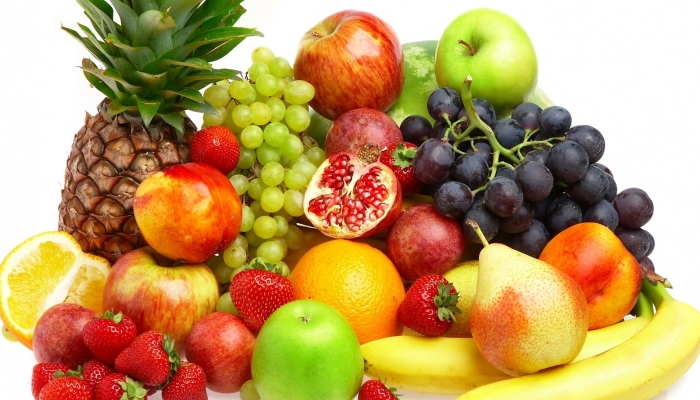 In biology (botany), a "fruit" is a part of a flowering plant that derives from specific tissues of the flower, mainly one or more ovaries.

Taken strictly, this definition excludes many structures that are "fruits" in the common sense of the term, such as those produced by non-flowering plants (like juniper berries, which are the seed-containing female cones of conifers), and fleshy fruit-like growths that develop from other plant tissues close to the fruit (accessory fruit, or more rarely false fruit or pseudocarp), such as cashew fruits. Often the botanical fruit is only part of the common fruit, or is merely adjacent to it. On the other hand, the botanical sense includes many structures that are not commonly called "fruits", such as bean pods, corn kernels, wheat grains, tomatoes, and many more. However, there are several variants of the biological definition of fruit that emphasize different aspects of the enormous variety that is found among plant fruits.

Fruits (in either sense of the word) are the means by which many plants disseminate seeds. Most edible fruits, in particular, were evolved by plants in order to exploit animals as a means for seed dispersal; and many animals (including humans to some extent) have become dependent on fruits as a source of food. Fruits account for a substantial fraction of world's agricultural output, and some (such as the apple and the pomegranate) have acquired extensive cultural and symbolic meanings.

Many fruits that are true fruits in a botanical sense, are actually treated as vegetables in cooking and food preparation, because they are not particularly sweet. These culinary vegetables include cucurbits (e.g., squash, pumpkin, and cucumber), tomatoes, peas, beans, corn, eggplant, and sweet pepper. In addition, some spices, such as allspice and chilies are fruits, botanically speaking. In contrast, occasionally, a culinary "fruit" is not a true fruit in the botanical sense. For example, rhubarb is often referred to as a fruit, because it is used to make sweet desserts such as pies, though only the petiole of the rhubarb plant is edible. In the culinary sense of these words, a fruit is usually any sweet-tasting plant product especially those associated with seed(s), a vegetable is any savoury or less sweet plant product, and a nut is any hard, oily, and shelled plant product.

Technically, a cereal grain is also a kind of fruit, a kind which is termed a caryopsis. However, the fruit wall is very thin, and is fused to the seed coat, so almost all of the edible grain is actually a seed. Therefore, cereal grains, such as corn, wheat and rice are better considered as edible seeds, although some references do list them as fruits. Edible gymnosperm seeds are often misleadingly given fruit names, e.g., pine nuts, ginkgo nuts, and juniper berries.

Nutritional value
Fruits are generally high in fiber, water and vitamin C. Fruits also contain various phytochemicals that do not yet have an RDA/RDI listing under most nutritional factsheets, and which research indicates are required for proper long-term cellular health and disease prevention. Regular consumption of fruit is associated with reduced risks of cancer, cardiovascular disease (especially coronary heart disease), stroke, Alzheimer disease, cataracts, and some of the functional declines associated with aging.

Diets that include a sufficient amount of potassium from fruits and vegetables also help reduce the chance of developing kidney stones and may help reduce the effects of bone-loss. Fruits are also low in calories which would help lower ones calorie intake as part of a weight loss diet.

Each fruit has a different set of beneficial plant substances such as carotenoids and flavonoids that have antibacterial, antiinflammatory, antitumor and antioxidant properties. Reduce your fruit juice intake if you are diabetic. Avoid drinking lots of fruits juices since they contain a large amount of fructose. Fructose can elevate blood sugar and lead to weight gain.