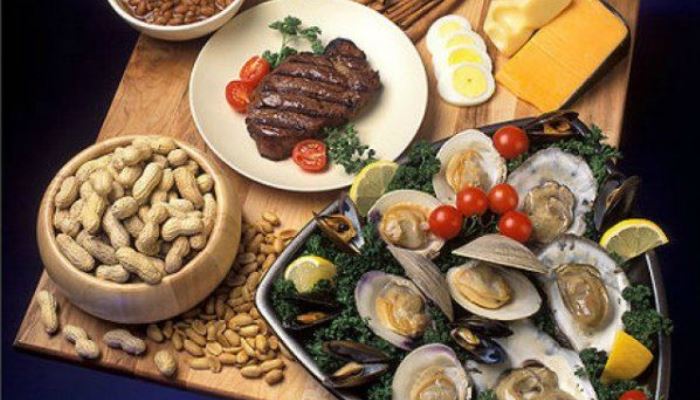 Zinc is an essential trace element for all forms of life. The significance of zinc in human nutrition and public health was recognized

Clinical zinc deficiency in humans was first described in 1961, when the consumption of diets with low zinc bioavailability due to high phytic acid content (see Food sources) was associated with "adolescent nutritional dwarfism" in the Middle East. Since then, zinc insufficiency has been recognized by a number of experts as an important public health issue, especially in developing countries.

Function
Numerous aspects of cellular metabolism are zinc-dependent. Zinc plays important roles in growth and development, the immune response, neurological function, and reproduction. On the cellular level, the function of zinc can be divided into three categories: 1) catalytic, 2) structural, and 3) regulatory.

Catalytic role
Nearly 100 different enzymes depend on zinc for their ability to catalyze vital chemical reactions. Zinc-dependent enzymes can be found in all known classes of enzymes.

Structural role
Zinc plays an important role in the structure of proteins and cell membranes. A finger-like structure, known as a zinc finger motif, stabilizes the structure of a number of proteins. For example, copper provides the catalytic activity for the antioxidant enzyme copper-zinc superoxide dismutase (CuZnSOD), while zinc plays a critical structural role. The structure and function of cell membranes are also affected by zinc. Loss of zinc from biological membranes increases their susceptibility to oxidative damage and impairs their function.

Regulatory role
Zinc finger proteins have been found to regulate gene expression by acting as transcription factors (binding to DNA and influencing the transcription of specific genes). Zinc also plays a role in cell signaling and has been found to influence hormone release and nerve impulse transmission. Recently, zinc has been found to play a role in apoptosis (gene-directed cell death), a critical cellular regulatory process with implications for growth and development, as well as a number of chronic diseases.

Food sources
Shellfish, beef, and other red meats are rich sources of zinc. Nuts and legumes are relatively good plant sources of zinc. Zinc bioavailability (the fraction of zinc retained and used by the body) is relatively high in meat, eggs, and seafood because of the relative absence of compounds that inhibit zinc absorption and the presence of certain amino acids (cysteine and methionine) that improve zinc absorption. The zinc in whole grain products and plant proteins is less bioavailable due to their relatively high content of phytic acid, a compound that inhibits zinc absorption. The enzymatic action of yeast reduces the level of phytic acid in foods. Therefore, leavened whole grain breads have more bioavailable zinc than unleavened whole grain breads. Recently, national dietary surveys in the U.S. estimated that the average dietary zinc intake was 9 mg/day for adult women and 13 mg/day for adult men.

Supplements
A number of zinc supplements are available, including zinc acetate, zinc gluconate, zinc picolinate, and zinc sulfate. Zinc picolinate has been promoted as a more absorbable form of zinc, but there are few data to support this idea in humans. Limited work in animals suggests that increased intestinal absorption of zinc picolinate may be offset by increased elimination.