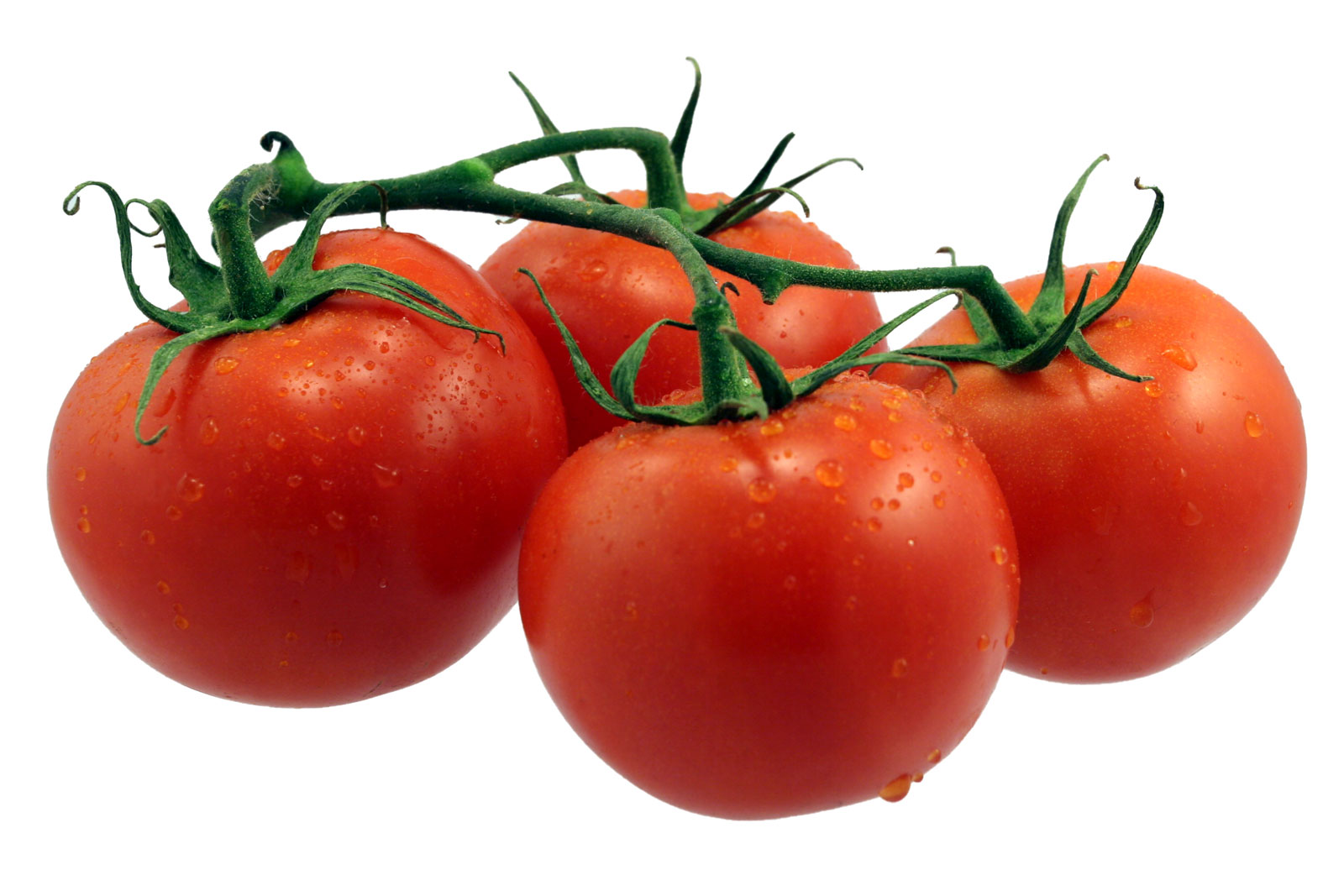 The tomato (Solanum lycopersicum) is a herbaceous, usually sprawling plant in the nightshade family widely cultivated for its edible fruit.

Savory in flavor, the fruit of most varieties ripens to a distinctive red color. Tomato plants typically reach to 1–3 metres (3–10 ft) in height and have a weak, woody stem that often vines over other plants. The leaves are 10–25 centimetres (4–10 in) long, odd pinnate, with 5–9 leaflets on petioles, each leaflet up to 8 centimetres (3 in) long, with a serrated margin; both the stem and leaves are densely glandular-hairy. The flowers are 1–2 centimetres (0.4–0.8 in) across, yellow, with five pointed lobes on the corolla; they are borne in a cyme of 3–12 together. It is a perennial, often grown outdoors in temperate climates as an annual.

The tomato is native to South America. Genetic evidence shows the progenitors of tomatoes were herbaceous green plants with small green fruit and a center of diversity in the highlands of Peru. One species, Solanum lycopersicum, was transported to Mexico where it was grown and consumed by Mesoamerican civilizations. The exact date of domestication is not known. The first domesticated tomato may have been a little yellow fruit, similar in size to a cherry tomato, grown by the Aztecs of Central Mexico. Aztec writings mention tomatoes were prepared with peppers, corn and salt. The word tomato comes from the Aztec tomatl, literally "the swelling fruit".

Many historians believe that the Spanish explorer Cortés may have been the first to transfer the small yellow tomato to Europe after he captured the Aztec city of Tenochtítlan, now Mexico City, in 1521. Others believe Christopher Columbus, a Genoese working for the Spanish monarchy, was the first European to take back the tomato, as early as 1493. The earliest discussion of the tomato in European literature appeared in an herbal written in 1544 by Pietro Andrea Mattioli, an Italian physician and botanist who named it pomo d’oro, or "golden apple".

There are many (around 7500) tomato varieties grown for various purposes. Heirloom tomatoes are becoming increasingly popular, particularly among home gardeners and organic producers, since they tend to produce more interesting and flavorful crops at the cost of disease resistance and productivity.

Health benefits of tomato include eye sight, good gut health, low hypertension, diabetes, skin problems and urinary tract infections. Tomato is considered both a fruit and vegetable and forms an integral part of the cuisine all across the globe especially in the Mediterranean region. Daily consumption of tomato provides a great boost to health apart from improving the flavour of food. It consists of a large number of antioxidants which have been proven to fight different forms of cancer. It is a rich source of vitamins and minerals and exerts a protective effect against cardiovascular diseases. It also improves eye health and prevents hypertension and urinary tract infections.

Tomatoes are now eaten freely throughout the world, and their consumption is believed to benefit the heart among other things. They contain lycopene, one of the most powerful natural antioxidants. In some studies lycopene, especially in cooked tomatoes, has been found to help prevent prostate cancer but other research contradicts this claim. Lycopene has also been shown to improve the skin's ability to protect against harmful UV rays. Natural genetic variation in tomatoes and their wild relatives has given a genetic treasure trove of genes that produce lycopene, carotene, anthocyanin, and other antioxidants. Tomato varieties are available with double the normal vitamin C , 40 times normal vitamin A, high levels of anthocyanin , and two to four times the normal amount of lycopene (numerous available cultivars with the high crimson gene).

Tomato is a rich source of antioxidants that have been proven to be effective against many forms of cancer. Some of the other health benefits of tomato are as follows:

- Abundant Source of Antioxidants: Tomato contains large amount of lycopene, an antioxidant highly effective in scavenging cancer causing free radicals. This benefit can be obtained from even heat-processed tomato products, including ketchup. The lycopene in tomato fights against cancer and has been shown to be particularly effective in fighting prostate cancer, cervical cancer, cancer of the stomach and rectum as well as pharynx and oesophageal cancers. It also protects against breast cancer and cancer of mouth according to studies published by Harvard School of Public Health.

- Reduces Cholesterol and Protects Heart: The lycopene in tomato prevents serum lipid oxidation, thus exerting protective effect against cardiovascular diseases. The regular consumption of tomato has proved to decrease the levels of LDL cholesterol and triglycerides in the blood. These lipids are the key culprits in cardiovascular diseases and lead to deposition of fats in the blood vessels.

- Rich Source of Vitamins and Minerals: A single tomato can provide about 40% of daily vitamin C requirement. Vitamin C is a natural antioxidant which acts against cancer-causing free radicals. It also contains abundant vitamin A and potassium as well as iron. Potassium plays a vital role in maintaining nerve health and iron is essential for maintaining normal blood health. Vitamin K which is essential in blood clotting and controls bleeding is abundant in tomatoes.

- Counters the Effect of Cigarette Smoke: The two main components of tomatoes, coumaric acid and chlorogenic acid, fight against nitrosamines which are produced in the body and are the main carcinogens found in cigarette smoke.

- Keeps Gut Healthy: Tomato keeps the digestive system healthy by preventing both constipation and diarrhoea. It also prevents jaundice and effectively removes toxins from the body.

- Alleviates Diabetes: A study conducted by Journal of the American Medical Association shows that daily consumption of tomatoes reduces the oxidative stress in type 2 diabetes.

Lycopene is an antioxidant that fights the free radicals that can interfere with normal cell growth and potentially lead to cancer, heart disease and premature aging. Tomatoes are one of the best sources of lycopene. Lycopene is a bright red carotenoid pigment and phytochemical and is responsible for giving tomatoes their bright red color. While not an essential nutrient for humans, lycopene is commonly found in the diet in several foods, but especially in tomatoes. When absorbed from the stomach, lycopene is then transported in the blood by various lipoproteins and accumulates in the liver, adrenal glands, and testes. Of all the carotenoids, lycopene is thought to be one of the most potent antioxidants. Lycopene is particularly able to fight singlet oxygen and peroxyl radicals, both of which are thought to be responsible for damaging DNA in a process that can lead to the formation of cancer. Due to this ability, lycopene is being researched as a potential agent for the prevention of certain types of cancers, especially prostate cancer. 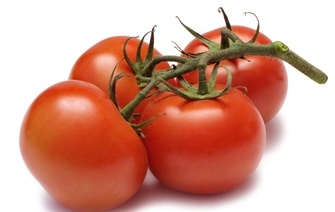 Unlike other fruits and vegetables, where nutritional content is diminished upon cooking, processing tomatoes actually increases the concentration of lycopene. Lycopene in tomato paste is four times more bioavailable than in fresh tomatoes. Thus, the best sources of lycopene are pasteurized tomato juice, tomato soup, tomato paste, tomato sauce and ketchup. Cooking and crushing tomatoes and serving in oil-rich dishes (such as pizza) greatly increases assimilation of lycopene from the digestive tract into the bloodstream. Lycopene is a fat-soluble substance, so the oil helps absorption.

Tomatoes are used extensively in Mediterranean cuisine, especially Italian and Middle Eastern cuisines. The tomato is acidic; this acidity makes tomatoes especially easy to preserve in home canning whole, in pieces, as tomato sauce, or paste. Tomato juice is often canned and sold as a beverage; Unripe green tomatoes can also be breaded and fried, used to make salsa, or pickled. The fruit is also preserved by drying, often by sun, and sold either in bags or in jars in oil.