Red Reishi (Ganoderma Lucidum), commonly known as Ling Zhi in Chinese, is a herbal mushroom known to have miraculous

health benefits, has shown in recent studies to be helpful for heart health, including normal cholesterol, blood pressure, and circulatory system support. Reishi mushroom contains a high amount of polysaccharides which are essential for proper functioning of the immune system. Reishi Mushroom is used as a tonic and a sedative. According to Traditional Chinese Medicine, reishi was thought to "mend the heart." Reishi is a cardio tonic that supports normal blood and oxygen flow to the heart. Reishi Mushroom is one of the most valued plants in the Chinese pharmacopoeia. Reishi has been used for over thousands of years as a miraculous remedy for a variety of diseases from traumatic wounds, inflammation, various ulcers. Reishi mushroom extracts have been shown to exert many beneficial effects which seems to support Reishi historical use as an "adaptagen". An adaptagen is defined as a substance which increases the resistance to stress and improves the general tone of the body and mind. 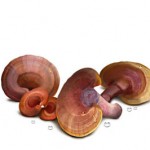